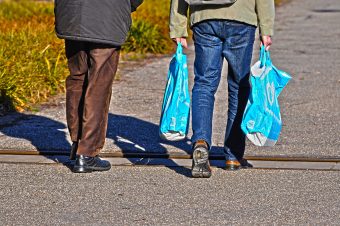 In the first six months of the 5p charge in England, 6bn fewer bags were handed out. Watch out coffee cups and plastic bottles.

England’s plastic bag charge was a long time coming – long after Ireland, Northern Ireland, Scotland and Wales – and critics predicted its exemptions for small stores and paper bags would diminish its effectiveness. A year ago, Andy Cummins, campaigns director of Surfers Against Sewage, predicted that England’s charge would reduce use of plastic bags, but not as effectively as in Scotland, Wales (down 78%) and Northern Ireland (down 81%).

In fact, in the first six months of the charge, the number of single-use plastic bags handed out by the seven biggest supermarkets fell by more than 85% from 7.6bn a year in 2014 to 600m. In that period, the levy raised more than £29m for charities and community groups. A study by Cardiff University found that more than nine out of 10 people often or always carry their own bags, up from seven out of 10 before the 5p charge came into effect.

Six billion fewer plastic bags in six months: Cummins is happy to be proved half-wrong. “It’s a fantastic success,” he says. “The vast majority have adapted their behaviour without a check in their stride. There will be a phenomenal net benefit for the environment from 6bn fewer bags.”

The Marine Conservation Society undertook its annual beach clean in September. Laura Foster, head of pollution, says that volunteers aren’t seeing plastic bags on the beach any more. “There is strong anecdotal evidence to suggest a decline in plastic bags in our marine environment,” she says.

Single-use plastic bags may not be being discarded in their previous numbers, but there are reservations about their replacements. Bags for life and, in particular, cotton bags require much more energy – and carbon emissions – to produce. A study by the Environment Agency found a “resource expenditure” of just 2kg of carbon per plastic bag: a paper bag would need to be used seven times to achieve the same per-use expenditure; a cotton bag would need to be used 327 times.

Supreme Creations, which claims to be the world’s largest ethical packaging company, reports a 20% increase in sales of its reusable carrier bags since the levy was introduced in England.

Surfers Against Sewage, Keep Britain Tidy and the Marine Conservation Society all say that there are no problems with reusable bags being littered on land or sea. “Because people pay for them, they value them and there is no tossing them away,” says Foster. What about the free ones? “Even if you get them for free, you hoard them,” says Cummins. “You need every bag you can get if your shopping is anything like mine.”

For analysts such as David Powell of the New Economics Foundation, the unequivocal success of the plastic bag charge shows that the government shouldn’t be afraid of using financial “nudges” in new environmental regulations. Who would imagine that a 5p charge changes human behaviour so decisively?

“By far the most interesting thing about the plastic bag charge is just how successful an incredibly small charge can be,” says Powell. “Introduce the right charge in the right way and people respond to it, particularly if there’s such an obvious environmental problem. The government will have to conclude, how can we use this principle for other things?”

The Cardiff University survey also reveals that the charge has made people in England more willing to accept regulations to reduce plastic waste, such as a 5p charge on plastic bottles. Plastic bags may have been litter’s poster child, but they amounted to just 2% of beach rubbish. Powell suggests a charge on coffee cups is an obvious next step. “There are massive piles of unrecycled coffee cups everywhere. It’s an obvious problem that people are keen to do something about.”

While the plastic-bag charge was about changing consumer behaviour, announcing a charge on coffee cups to apply at a future date would give the industry an incentive to innovate and find alternatives, rather like the sugar tax, which will apply from 2017.

Both Keep Britain Tidy and Surfers Against Sewage would like to see the government close the loopholes in England’s current plastic bag charge so that paper bags incur a charge, too, and small shops are no longer exempt (the Association of Convenience Stores wanted to be included in the charging system from the outset). However, a Defra spokesperson says there are currently no plans to extend the regulations.

“We walk into meetings with Defra where the position is: ‘The government doesn’t want new regulations.’ Unfortunately, that’s the default position,” says Cummins. He thinks the next example of a win-win regulation that would benefit consumers, industry and the environment is a deposit-return system for drinks bottles. Such systems are used in dozens of European countries from Germany to Croatia, and in Australian and American states, too.

Reverse vending machines that give people, say, 20p for their plastic and glass bottles and aluminium cans deliver recycling rates of up to 90%, provide high-grade recyclable materials for industry, and save councils’ doorstep recycling and rubbish bin costs, argues Cummins. If placed on shop floors, they also encourage footfall; it’s not hard to imagine kids collecting bottles and quickly spending their earnings in the shops.

“We all know that litter breeds litter,” says Cummins. “If you can take these really visible litter items out of the environment with a successful deposit-return system, it will have a knock-on effect and everyone will treat their environment better.”