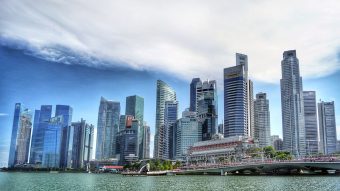 The scheme, which would see more than 30 of the nation’s largest polluters forced to pay tax on their emissions, would initially price a tonne of greenhouse gas emissions at between S$10 (US$7) and S$20 (US$14).

Although the Singapore government admitted the initiative would likely push up energy prices by between two and four per cent, Swee Keat said the tax is the fairest and most efficient way to bring down emissions.

“The most economically efficient and fair way to reduce greenhouse gas emissions is to set a carbon tax, so that emitters will take the necessary actions,” he said during his 2017 budget speech. “Singapore is vulnerable to rises in sea level due to climate change. Together with the international community, we have to play our part to protect our living environment.

Under the Paris Agreement, Singapore has promised to reduce its emissions intensity by 36 per cent by 2030, against 2005 levels, and peak overall emissions by around 2030.

The tax would be imposed on carbon dioxide emissions alongside five other greenhouse gases including methane and hydrofluorocarbons. Revenues will be used to help fund industry emission reduction measures.

An industry consultation has already been launched on the proposal, which Swee Keat said has the potential to “spur the creation of new opportunities in green growth industries such as clean energy”. A final decision is expected in the coming months.

The move comes as China is preparing to launch what is expected to be the world’s largest carbon market. The country has been testing regional pilots, and intends to launch a nationwide scheme by the end of the year.