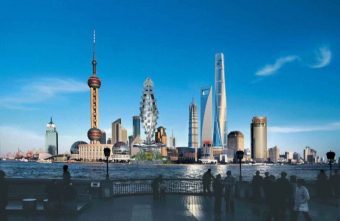 Flying cars seem to be moving from the realm of science fiction to reality – and Richard’s Architecture + Design (RA+D) helmed by architect Richard Moreta Castillo has already designed a net-zero tower pioneering drone car infrastructure. The Smart Power Long tower, a condominium building planned for Shanghai, features landing pads for flying cars. The futuristic concept is super green, according to RA+D, and will feature a vertical forest in which 50,000 trees and shrubs could scrub the skies.

Dubai started testing flying taxis earlier this year, and RA+D also pointed to Nevada officials seeking permission from the Federal Aviation Administration for flying passenger drones as evidence the futuristic vehicles could soon be soaring the skies. RA+D first came up with the drone car tower concept in 2015 with their Moscow Tower, and they said the Shanghai tower’s construction could occur faster than expected – between 2018 and 2020.

The condominium tower draws design inspiration from Chinese dragon art. Docking stations for drone cars wind up the exterior. The building could clean the air naturally, as plants take in carbon dioxide, and could also have 180 carbon dioxide extractors, according to RA+D. The air could then be expelled from the top in numbers corresponding with the hour, illuminated with an LED spotlight to create an appearance similar to fire, to create what RA+D described as the “first smoke and chromatic clock for the reference of the Shanghai community.”

Smart Power Long is designed for Shanghai’s Pudong District with a budget of $600 million.