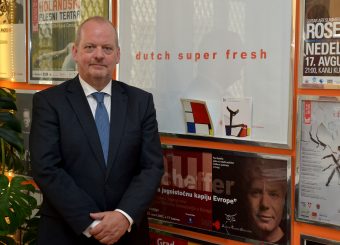 Energy portal had chance to meet in Novi Sad Mr Henk van den Dool, ambassador of Netherlands in Serbia. We talk to him during  the fair “International days of energetics and investment”  which were held in March. He presented energy sector of his country at the opening ceremony of the international conference Perspective & Challenges in Energy sector. In the summer of 2015, Henk van den Dool was appointed Ambassador to the Republic of Serbia in Belgrade. He is also accredited to Montenegro. The main areas of expertise and interest of Ambassador Van den Dool are European Integration, Human Rights and transformation processes in Central and Eastern Europe. Since Serbia has many challenges to solve in process of EU integration, his opinion about energy sector is very useful.

EP: Can you please compare The Netherlands and Serbia, speaking of renewable sources of energy, and due to this comparison tell us what should we change here in Serbia?

Mr. Dool: The Netherlands has a strong, innovative energy sector, and the government wants to further strengthen its competitiveness. This is good for the Dutch economy and will thus contribute to economic recovery. The government has therefore identified energy as a priority sector. In the area of green energy, the approach focuses on the development and profitability of renewable energy technologies. Innovation is essential for making renewable energy competitive, and business can benefit by selling these technologies on the domestic and international market. The emphasis must therefore move towards stimulating innovation and move away from promoting renewable energy through expensive and ineffective operating grants for unprofitable technologies.

I am often saying that The Netherlands is a very efficient country compared to many other countries, including Serbia. The main reason for our resource efficiency is that we were forced to cope with very limited resources for a long period of time, and at the same time we strived to be as independent as possible from external suppliers. The EU integration process is very precise when it comes to legislative framework adjustments, and Serbia has progressed significantly in this sense. The main challenge in Serbia is the implementation of existing legislation, and in this sense, more focus on this aspect would be beneficial. Serbia has accepted its 2020 targets and is still far from the threshold of 27%. This means that developers in all renewable sectors should be supported more by more efficient and transparent administrative procedures, while at the same time efforts to save energy in public and private consumption should be stimulated.

EP: Since wind power plants are very developed in Netherlands, is there maybe a plan for some investment in Serbia in the future period, and what companies are planning to invest in Serbia?

Mr Dool: The Netherlands has embraced a courageous vision: by 2050, the country will have a sustainable, reliable and affordable energy system. As part of this, the Dutch aim to cut CO2 emissions by half, and to generate some 40 percent of our electricity from sustainable sources such as wind at sea and biomass by that time. The Dutch have leading expertise in offshore wind energy, co-combustion of biomass in coal-fired power plants, methods to pre-treat biomass, the use of landfill gas, and the use of heat pumps combined with heat and cold storage. The Netherlands distinguishes itself from other countries with its offshore know-how, which is vital for wind projects at sea. For instance, the Princess Amalia offshore wind farm is the largest of its kind in the world outside the 12-mile limit, and is also built in the deepest water. Also, the largest European wind turbines testing site is located in the Netherlands, near Lelystad.

Serbia has remarkable wind-based energy generation potential as well. The entire south Banat and large parts of eastern Serbia have been recognized as good areas for wind parks development. It is enough just to look over Danube at the Djerdap gorge and to see how much electricity generation is taking place at the Romanian side of the shore. The wind projects in Serbia have been facing challenges since the beginning, regardless the nationality of investors. These challenges were mainly related to very slow adoption and implementation of regulations and rulebooks, quite frequent change of some of the regulations, low level of coordination with the developers and financing institutions.    Still, I think it is very important to highlight that a part of our investors, Serbia would highly profit from more wind power in its portfolio. Being highly dependable on water and coal is perhaps not the safest strategy. It is enough to look just few years back when the floods paralyzed Serbian energy system. So more diversified means more free and safe future.

EP: What would be your advice about using of biomass and biogas? Can you describe in numbers and facts how it is developed in Netherlands? 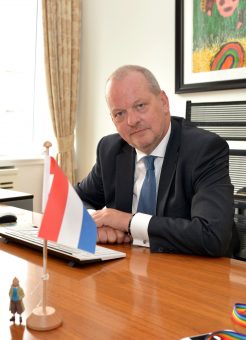 Mr Dool: As part of our approach to a more sustainable energy system, the Dutch are fully embracing energy from organic sources, specifically biomass, waste, biofuels, the Jatropa plant and algae. Biomass accounts for almost two-thirds of the sustainable energy currently used in the Netherlands, while the government is aiming to produce 30 percent of its energy using biomass by the year 2030. It is the simplest of all the sustainable options to integrate into energy management. Obtaining bio-energy from biomass may involve combustion, gasification, fermentation, or the production of liquid biofuels. The most important bio-energy sources are biomass additives and fuel in power plants, biofuels for motor vehicles, and energy from waste incineration plants.

Similarly, green gas comes from biomass, which refers to biological material that can be used for fuel or industrial production processes. Green gas can be generated either by fermenting biomass or through gasification, which involves expositing biomass to pure oxygen and/or steam. Gasification is suited to large-scale uses, is not only CO2 neutral, but actually extracts large amounts of CO2 from the atmosphere. The Netherlands is soon expected to be a home to some of the first large scale Zero Emission Power Production (ZEPP) plants, and here I am talking about fully climate-neutral commercial gas-fired electric power plants.

The real biomass market in Serbia does yet not exist, but I see developments in this direction which is good. Let me remind you that Serbia has way more arable land than my country and that the biomass potential is enormous. People simply have to see how it works, and I am happy to announce that very soon we are going to have a brand new cogeneration plant of about 1 Mw in village of Botos near Zrenjanin. Our government contributed financially to the development, and the plant is developed by Dutch company HOST. This project is supposed to serve as an example of successful practice where agribusiness meets energy generation, and ultimately becomes more profitable and resource efficient.

EP: What is the future of energetics in Balkans and Europe according to your opinion, since there are many challenges in field of fossil fuels and gas?

Mr Dool: Diversification, cooperation, efficiency and renewable energy. I think these four elements together form the winning formula which holds for all the countries in the Balkans. The standard forms of energy generation such as coal are definitely part of that mix and I am not implying they should be closed down, but I would be good if coal extraction and combustion would be additionally modernized and less hazardous for the environment. Beyond coal there are also water, wind, biomass and natural gas. Using even 30% of the potential in each of these sectors would completely change the energy outlook of any of the countries in the Balkans.

Obviously, some countries have more potential in wind than water, or biomass than wind. More cooperation and grid connectivity would help countries to even easier balance their energy demands in short term, would provide more security and incentives to private investors, and would reinforce mutual cooperation and support in the region. So cooperation and interconnections are crucial. I am pleased to see that some steps in this direction have been made, and that countries of the region are cooperating on joint projects within and outside of the region. The Netherlands is more than willing to continue supporting Serbia on its EU integration path, especially in area of energy, sustainability and water management technologies.