Sea level rise is set to challenge human civilization for centuries to come, even if internationally agreed climate goals are met and planet-warming emissions are then immediately eliminated, researchers have found. 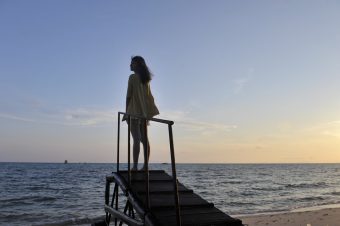 The lag time between rising global temperatures and the knock-on impact of coastal inundation means that the world will be dealing with ever-rising sea levels into the 2300s, regardless of prompt action to address the climate crisis, according to the new study.

Even if governments meet their commitments from the landmark 2015 Paris climate agreement, the first 15-year period of the deal will still result in enough emissions that would cause sea levels to increase by around 20cm by the year 2300.

This scenario, modeled by researchers, assumes that all countries make their promised emissions reductions by 2030 and then abruptly eliminate all planet-warming gases from that point onwards. In reality, only a small number of countries are on track to meet the Paris target of limiting global heating to 2C above the pre-industrial era.

“Even with the Paris pledges there will be a large amount of sea level rise,” said Peter Clark, an Oregon State University climate scientist and co-author of the study, published in Proceedings of the National Academy of Sciences.

“Sea level rise is going to be an ongoing problem for centuries to come, we will have to keep on adapting over and over again. It’s going to be a whole new expensive lifestyle, costing trillions of dollars.

“Sea level has a very long memory, so even if we start cooling temperatures the seas will continue to rise. It’s a bit like trying to turn the Titanic around, rather than a speedboat.”

Researchers used a computer model that simulates sea level rise in response to various emissions levels, looking both at historical emissions since 1750 and also what the emissions scenario would be from 2015 to 2030 if countries met their Paris agreement obligations.

About half of the 20cm sea level rise can be attributed to the world’s top five greenhouse gas polluters – the US, China, India, Russia and the European Union – according to the researchers. The US was a key architect of the Paris deal but this week Donald Trump formally triggered its exit from the agreement.

“Our results show that what we do today will have a huge effect in 2300. Twenty centimetres is very significant; it is basically as much sea-level rise as we’ve observed over the entire 20th century,” said Climate Analytics’ Alexander Nauels, lead author of the study. “To cause that with only 15 years of emissions is quite staggering.”

The results reveal the daunting prospect of a near-endless advance of the seas, forcing countries to invest huge resources in defending key infrastructure or ceding certain areas to the tides. Many coastal cities around the world are already facing this challenge, with recent research finding that land currently home to 300 million people will flood at least once a year by 2050 unless carbon emissions are drastically slashed.

As the world heats up, ocean water is expanding while land-based glaciers and the two great polar ice caps are melting away, causing the oceans to swell.

According to the UN’s climate science panel, the global sea level rise could reach as much as 1.1 metres by the end of the century if emissions aren’t curbed. Clark pointed out the real situation could be even worse if the melting of the Antarctic turns out to be on the dire end of the spectrum of uncertainty.