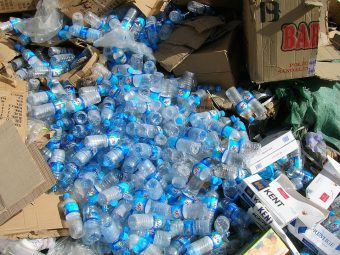 One of the factors driving the plastic pollution crisis is that very little of it gets reused effectively—as of 2015, only 9 percent of all plastics ever made had been recycled, a 2017 Science Advances study found.

This is because, as ScienceNews explained, when plastics break down, they usually break down into molecules that can’t be easily reshaped into plastics or other useful items without going through many different chemical processes.

But researchers at Colorado State University (CSU) have developed a potential solution to the plastic recycling problem.

In an article published in Science today, they unveiled a new polymer with many of the same characteristics as plastic that can be more easily returned to its original molecules to be recycled, without the need for toxic chemicals or complicated lab processes, a CSU press release reported Thursday.

“The polymers can be chemically recycled and reused, in principle, infinitely,” Eugene Chen, a CSU chemistry professor whose lab developed the material, said.

Polymers, of which plastics are one type, are made from chains of repeating molecules. The new polymer developed by Chen’s lab shares important characteristics with plastic such as strength, durability, lightness and heat resistance.

The recent polymer builds on another developed by Chen’s lab in 2015, which could only be made under commercially impractical cold conditions. It was also softer than plastic, with less heat resistance and molecular weight.

But Chen said the lessons learned from that polymer were essential to developing the newer model, which can be made without solvents and under room temperature conditions that could be more easily replicated by industry. It can also be easily broken down using a catalyst and returned to its original shape for reuse.

The polymer still needs more work before it will be available commercially. Chen and his team have received a grant from CSU ventures that they are using to develop an even cheaper, more efficient process for developing similar polymers, as well as exploring how they can be produced on a larger scale. But Chen thinks he and his team are headed in the right direction.

“It would be our dream to see this chemically recyclable polymer technology materialize in the marketplace,” Chen said in the press release.

If Chen makes that dream come true, his work could aid governments and businesses as they work to reduce plastic pollution. Just a day before his paper was published, more than 40 UK businesses joined a UK Plastics Pact that aims, among other things, to source 30 percent of the UK’s packaging from recyclable sources by 2025.