Through burning vast amounts of fossil fuels over the decades, we’ve pumped so much CO2 into the atmosphere that even if we had stopped burning any more at all, the planet’s climate would still be changing irrevocably. And it’s not as if we are going to stop burning yet more fossil fuels any time soon. 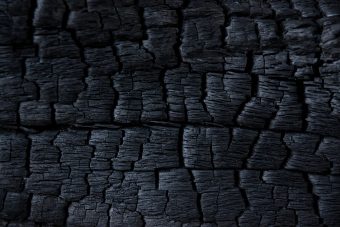 The solution then is to capture much of the carbon already in the atmosphere and store it somewhere else. There are several promising lines of research into large-scale carbon capture methods. One, for instance, involves tweaking plants’ carbon fixation ability so they can suck more CO2 and store it as biomass.

Here now comes another one: in a breakthrough a team of researchers at MIT University in Melbourne, Australia, has devised a process whereby carbon dioxide can be turned back into solid coal. In other words, coal burned as a fossil fuel to generate heat and energy can be recaptured as CO2 and returned to its original form.

“[W]e created a liquid metal electrocatalyst that contains metallic elemental cerium nanoparticles, which facilitates the electrochemical reduction of CO2 to layered solid carbonaceous species, at a low onset potential of −310 mV vs CO2/C,” the scientists explain in a paper published in the journal Nature Communications. “We exploited the formation of a cerium oxide catalyst at the liquid metal/electrolyte interface, which together with cerium nanoparticles, promoted the room temperature reduction of CO2.”

The scientists have designed a liquid metal catalyst that is very efficient at conducting electricity. Carbon dioxide is dissolved in a beaker filled with an electrolyte liquid and a small amount of the liquid metal. The metal is then charged with an electrical current, whereupon on its surface CO2 slowly begins to convert into solid flakes of carbon. These flakes then detach naturally from the metal’s surface, which makes it possible to keep on producing more and more carbonaceous solid.

“While we can’t literally turn back time, turning carbon dioxide back into coal and burying it back in the ground is a bit like rewinding the emissions clock,” says Torben Daeneke, an expert at MIT University.

The researchers note that current technologies for carbon capture and storage usually focus on compressing carbon dioxide into a liquid form so that it can be transported and then stored, preferably somewhere underground. Yet doing so can come at such great costs as to make the process financially prohibitive. There are also environmental concerns about possible leaks from storage sites.

Less so with their method, they stress. “To date, CO2 has only been converted into a solid at extremely high temperatures, making it industrially unviable,” Daeneke says. “By using liquid metals as a catalyst, we’ve shown it’s possible to turn the gas back into carbon at room temperature, in a process that’s efficient and scalable. “While more research needs to be done, it’s a crucial first step to delivering solid storage of carbon.”

The project is scalable, which means it could be applied at an industrial scale at relatively low costs. And there’s more. “A side benefit of the process is that the carbon can hold electrical charge, becoming a supercapacitor, so it could potentially be used as a component in future vehicles,” says the paper’s lead author Dorna Esrafilzadeh. “The process also produces synthetic fuel as a by-product, which could also have industrial applications.”