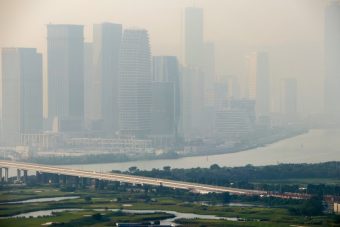 More than 100 schools from eight European countries participated in the citizen science CleanAir@School inititative, organised by the European Environment Agency (EEA) and the European Network of the Heads of Environmental Protection Agencies. The results of the initiative, published today, describe how schoolchildren measured pollution levels, learned about air quality and promoted actions for cleaner air.

The EEA and the European Network of the Heads of Environmental Protection Agencies (EPAs) organised CleanAir@School, a citizen science initiative to monitor air quality. From 2018 to 2020, pupils, teachers and parents engaged in the project used simple, low-cost devices to measure nitrogen dioxide (NO2) levels around their schools. NO2 is one of the key air pollutants harming human health in Europe. Its main source is road transport and it is therefore a problem especially in urban areas.

Air quality was monitored using so-called passive NO2 samplers, with one sampler on the road at the front of the school and one in a less polluted area such as the school backyard. School children in the eight participating countries measured pollution levels around their school, learnt about air quality and ways to improve it and made posters and videos. The school projects also explored ways to promote walking, cycling and the use of public transport to get to school as an alternative to coming by car.

Aside from this educational aspect, the CleanAir@School initiative tested how citizen science might complement official air quality monitoring data. At a European level, such approaches support the zero pollution ambition and the efforts to promote the wider use of citizen science to complement environmental reporting and encourage citizens’ engagement in air quality issues.