A pair of council officers in hi-vis jackets scrutinise a clipboard before approaching a bungalow on a windswept estate on the western outskirts of Swansea. They are looking for residents who have sneaked recyclables into black bin bags destined for landfill sites or incineration plants. 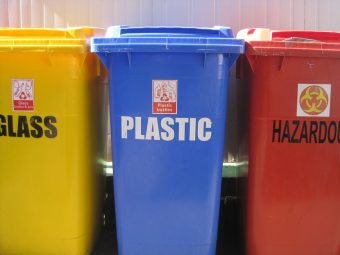 Recycling promotion officer Scott Matthews shakes two bulging, partly ripped bags and listens to the telltale clinks and clanks: “There’s glass and cans in these. There is food too. And there is no recycling out whatsoever.”

Swansea is the only council in the UK sending in special teams – referred to by some disgruntled locals as the “rubbish police” – to check household waste for recyclables and issuing fines of up to £100 to those who refuse to separate materials such as plastics and glass into coloured bags.

The scheme, which was launched last month, is part of the city’s efforts to boost its already impressive recycling rates, before a further rise in the UK’s only statutory local authority targets for household recycling, which were brought in by the Welsh government in 2012.

The targets have helped take Wales to third in the municipal recycling world rankings, just behind Germany and Taiwan. Swansea currently recycles 62-63% of its waste – far in excess of the UK average of 44.6%. But from April the city will need to recycle 64%, or risk £200 fines for every tonne of excess waste, which could run into millions of pounds.

The bin bag checks are the brainchild of Chris Howell, who heads Swansea council’s waste department. “It’s not right that a minority are choosing to throw recyclable material away to be buried or burnt when natural resources are finite,” he says.

While recycling levels in the city are relatively high, he insists more could be done. “Half of what is in residual waste in black bags is recyclable material and a quarter of it is food waste,” he says.

Councils tend to use indirect ways to get people to recycle more, such as limiting the number of waste bags or the frequency of waste collections, but Howell is trying something different. “We are taking a more direct approach,” he says. “We don’t want recyclable material in a bag destined for landfill – that’s why we are seeking to keep it out.”

He emphasises that people will get three warnings over an eight-week period before any fines are imposed. “You can’t get fined for accidents. The process is in place to ensure that it is targeted at habitual and determined non- or token recyclers.”

Officers, he adds, will also take into account people’s vulnerabilities: “Some people have learning difficulties or have dementia. We have a letter we can issue saying ‘we fully understand you are trying your best and no further action will be taken’.”

This does not completely reassure Jemma Bere, policy manager at the charity Keep Wales Tidy. She fears the fines may disproportionately hit poorer communities, as research suggests the lowest-income families are less likely to recycle. “The only correlation with the lack of take-up with household recycling is socioeconomic status,” she says. “Education and engagement have to come first. Enforcement – especially when it is in the home – should be a last resort.”

Back on the estate, Matthews and his colleague, Dave Brown, have only managed to speak to four residents with recyclables in their fortnightly allowance of three black bin bags. They include a man in his 60s with a serious health problems and younger man, Kevin Thomas, who admits to paying individuals known as “black baggers” to take his rubbish because his family produces between 10 and 15 bags of waste every fortnight.

He is worried by the idea of a fine: “It’s shocking. There are five of us living here. We make a lot of rubbish.”

At the other end of the cul-de-sac, Gareth Dallimore, 47, says he recycles but doesn’t want officers rifling through his bags. “It’s an invasion of privacy. I put my bills and bank statements in there,” he says.

Most, however, appear to approve of the new approach. Deborah Davies, 49, doesn’t mind her rubbish being checked. “It is important to reuse stuff. It is environmentally friendly. It’s the right thing to do, especially when you have got children,” she says outside her house. “You want your children to have a better world.”

Retired cleaner Susanne Jones, 74, who is taking her dog for a walk, agrees: “We recycle everything we can. Odds and ends we put in black bags but that’s all. We do it for the environment, for our children.”