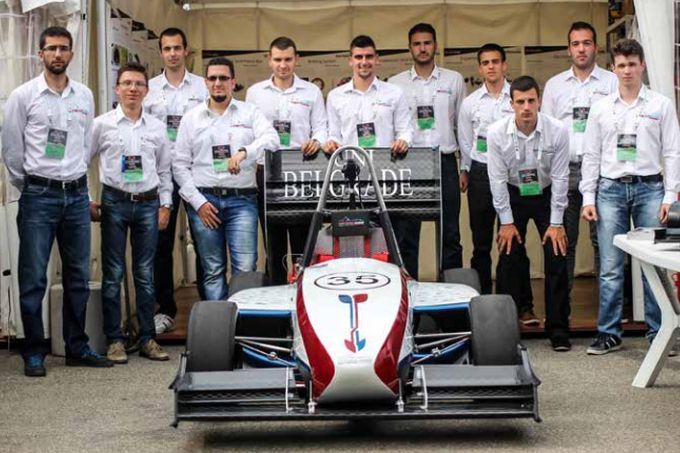 Road Arrow is the first Serbian Formula Student team whose members are the students from the University of Belgrade. For seven years now, this group of enthusiasts and formula lovers have created vehicles that represent their university and Serbia at prestigious engineering competitions in the world. In the current season, the Road Arrow team has more than fifty members from the Faculty of Mechanical Engineering, Electrical Engineering, Metallurgy, Transport and Traffic Engineering, Physics, Forestry, as well as Faculty of Organizational Sciences and Faculty of Applied Art. Year in, year out, Road Arrow goes to various competition with a formula that is always better than the one made in the previous season and there are notable results and numerous awards. The reason for the conversation with members of the most perspective student project at the University of Belgrade is the recent promotion of the sixth vehicle “Road Arrow 2017”, as well as their ecomobility project, which is in the process of being formed.

EP: How was the idea of creating a Serbian formula launched?

Drumska strela: Initially, the team consisted of 12 students who learned from their colleagues from Rijeka about the Student Formula project and wished to create the formula themselves, in order to represent the University of Belgrade and the Republic of Serbia at this international engineering competition. In the first year, they developed only the car concept design and competed in Class II in Silverstone, UK, where they took the third place. The following year they went to Silverstone with a completed formula. Over a hundred students have passed through the course and 6 vehicles have been made since then.

EP: What are students’ motives to join your team?

Drumska strela: Motives are different, from the fans of auto-moto sport that study at one of the technical faculties, to the students of social faculties who can apply their knowledge to this project. At first, students are interested in good practice and the opportunity to participate in a prestigious competition, but after a season spent on the team they get a completely new image on Road Arrow. As observed, it is obvious that the teamwork and gaining experience in this complex project bring a lot of benefits. However, later, reasons for staying on the team are much more complex and nicer.

EP: What is the driving energy in Road Arrow?

Drumska strela: It is, above all, the fact that Road Arrow was created thanks to enthusiasm and resistance to various problems that stood in the way of making the first vehicle and going to competitions. Also, there is a good atmosphere on the team and a common goal that is passed on from generation to generation.

EP: Do students exclusively work on this project or did some of the professors come to help?

Drumska strela: The team structure has changed completely since 2010, but the essence of Road Arrow remained the same. Effort, cooperation, thousands of working hours each season and team spirit keep this project active and with more quality year after year. According to the competition rules, all team members must be students, but the difficult and responsible task of creating a formula would neither be possible, nor safe, without constant support and advice from professors. Also, the team has great assistance from former members, who keep up with plans for each season and without whom Road Arrow would not be what it is.

EP: Which technologies were used during the process of creating the vehicle? What is the biggest trump card of Road Arrow?

Drumska strela: Vehicle production is divided into sub-teams, which deal with different systems on the vehicle. Specifically, in the design of “Road Arrow 2017” sub-teams Chassis and Handling, Aerodynamics and Design, Powertrain and Electronics and Materials took part. It is interesting that all parts of the vehicle were designed and produced by students themselves and only parts such as engine, tires and wheels are purchased. Of the innovations introduced, the interesting thing is the use of carbon fibers for the production of the whole aero package, driver’s seat, steering wheels, electronic boxes, as well as many other parts where the mass is significantly reduced in the same way. This has contributed to the vehicle’s better performance, which is the practical goal of the team – to make the best formula possible with their knowledge and innovation. By realizing their ideas, Road Arrow has been created, a student formula that reaches a speed of 100 km/h.

The team of the Belgrade University became recognized throughout Europe for its rapid progress, since the second formula was lighter than the previous one by as much as 40 kg and had a maximum power of 16 kW. Already on the third vehicle, the first aero package was presented, as well as the inlet chamber of variable geometry, and in the fifth they introduced parts made of carbon fibers, such as those in Formula 1. The biggest success of the team so far is the 10th place in the competition of 43 prestigious teams in the competition in Italy in 2013, and 4th in the race of endurance, the most demanding discipline, in the Czech Republic 2015.

EP: In May this year, the sixth vehicle was presented. What characteristics have been improved in comparison to previous vehicles? Where will Road Arrow race in the next season?

Drumska strela: “Road Arrow 2017” is the sixth vehicle of this team and it is the result of many years of advancement that led to the development of formula with the most optimal technological solutions up to now. Significant improvements have been made in handling system and driver’s ergonomics, and the mass of the vehicle has been reduced and the balance is lower. Its own radio communication was developed, changes were made to the aero package, and the use of 3D printed parts was expanded. We expect that this car will be the best so far, that we will soon be able to see, after the first competition that takes place on July 19th in Italy. After that, we will compete in the Czech Republic, from there we will travel directly to the biggest and most important competition in Europe that takes place on the track in Hockenheim in Germany. It will be the third appearance of Road Arrow on Formula 1 track in the competition of the best teams around the world. 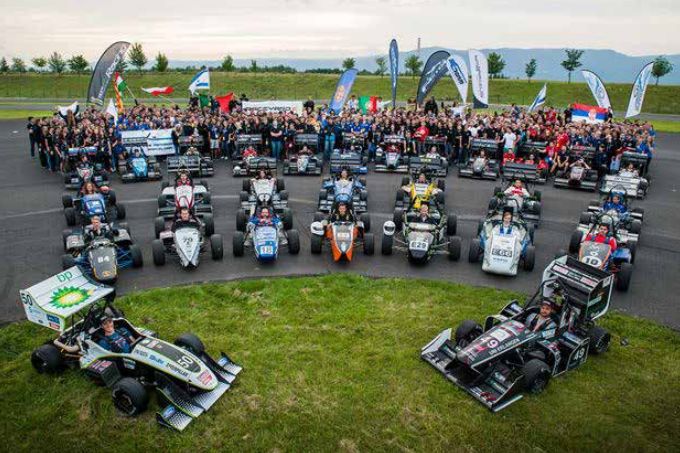 EP: You have recently announced the development of an eco-vehicle, so tell us which technologies will be used? Will it be hybrid or electric vehicle?

Drumska strela: Last year, the idea of creating an electric vehicle was born. There is a special class within the Formula Student Competition, which is becoming more increasingly popular, due to the ecological significance of the reduction of CO2 emissions from vehicles. By participating on this project, students learn how to design and make an electric vehicle, so they may later, during their professional career, be given the opportunity to develop passenger vehicles that operate in the same principle. Last year Road Arrow came up with the design concept for the electric vehicle and won the praiseworthy third place in Italy. The concept is a vehicle that has two electric motors on the rear wheels, with alternate current supply of variable frequency. The battery of the electric vehicle is made of batteries and our team decided to use lithium-ion cells. Also, there is a concept of a variant with four electric motors, one at each wheel, which requires a more complex control algorithm.

EP: How did the team decide to further develop the formula in the direction of ecomobility? Is the motive of being driven on alternative drives currently trendy or the reason is sustainable future of racing cars?

Drumska strela: Foreign teams have been making electro formulas for years and they have a huge support. The world’s largest automotive companies finance these projects because it is an investment that will pay off in multiple ways. The sticker on the vehicle is a trifle in comparison to the knowledge and experience of young experts who leave Formula Student teams to go to positions with big responsibility in companies where they apply everything they have learned. Road Arrow team saw the growing interest in electric vehicles, which is one of the solutions in the fight against pollution in urban areas. Students work on innovations and development in the industry and they could be able to help Serbia’s economic growth in a short time. The conclusion is that behind the engineering challenge of completely new and different vehicle, there is an economic aspect that is both important in the competition and in a future career.

EP: How will the battery and charger be solved when the concept of an electric vehicle turns into a new formula?

Drumska strela: We are just working on the concept of an electric vehicle. A total of 720 individual lithium-ion cells are connected appropriately to achieve the required capacity, and the capacity itself is determined based on computer simulations. The charger is powered by a three-phase AC 400 V voltage supply, and can be used anywhere (in a workshop, at a competition or some other event). This charger provides a very simple adjustment of the voltage and current at the output, and can be adjusted to charge other lithium-ion batteries. To charge the battery, it takes a little more than one hour.