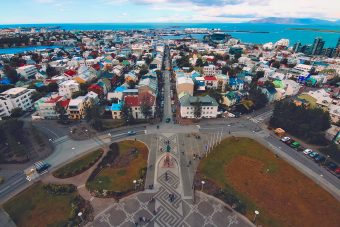 Icelandic capital plans to reduce its greenhouse gas emissions to zero by 2040 by reversing urban sprawl and promoting walking, cycling and public transport.

Reykjavík used to be marketed as a place of “pure energy”, run on geothermal power – and now Iceland’s capital is trying to become the world’s first carbon neutral city.

Last month, Iceland became one of the first countries to ratify the Paris climate deal with a unilateral parliamentary vote, shortly after Reykjavik announced its aim to be carbon neutral by 2040.

It wants to reduce its greenhouse gas emissions from 2.8 tonnes per person in 2013 to zero – largely by changing the shape of the city to reverse urban sprawl and encouraging Icelanders out of their beloved cars to walk, cycle or use public transport.

The city already has a head-start thanks to its reliance on geothermal energy. The US, for example, has a greenhouse gas footprint of 16.5 tonnes per person.

The city, the world’s northernmost capital, has a population of just over 120,000, with 60% of Iceland’s population in its metropolitan area. A pull for increasing tourism – expected to make up a tenth of the country’s 2016 GDP – is Iceland’s amazing geothermal features. These resources also mean all Reykjavík’s houses have geothermal heating, plus 100% hydroelectricity.

“Now we’re going to push it further and do it faster,” says Ólöf Örvarsdóttir, head of the environment and planning department. “We’re very lucky because we have our natural energy but it’s about taking a stand and educating people who live here.”

“I think we can achieve it but our biggest challenge is transport,” says Örvarsdóttir. To solve that Reykjavík plans to keep investing in bike paths (it has a £3.3m budget for this year), install more electric car charging points, and work with six neighbouring municipalities on a new rapid bus or light rail system.

The city already has a bus system but it is only used by 4% of people – and it aims to treble public transport usage by 2030. It wants cycling to increase from 19% to more than 30%, and is encouraging electric car use in its own 9,000 public employees and others via free parking and lower taxes.

Solving its “urban growth quandary” is key to reducing the transport-related 80% of emissions, says Þorsteinn Hermannsson, city director of transport and urban design. “Around 75% of all trips in the Reykjavík area are by car, so a low-hanging fruit is to get people to walk or bike or use more energy-efficient public transportation,” he says. “We tend to use our car as our overcoat instead of dressing up and walking 1km.”

Hermannsson is embarking on a project to persuade residents to live in the city, not suburbs. “The Reykjavík area is quite sprawled, like an American city, and that’s reflected in the private car choice,” he says. “We have to grow inwards instead of outwards and people living closer to work and shops will mean they move differently.”

City surveys suggest young people are keen to live in the city, and public transport expert Jarrett Walker – who ran executive workshops for the area last year – says the current sprawl is a real problem. “Carbon neutrality always comes down to urban form,” he says. “Outside the small historic centre Reykjavík is mostly high-density sprawl: apartment blocks oriented towards motorways or fast streets rather than to pedestrian infrastructure or logical public transport paths. Many people in these towers can’t even walk to a convenience store.”

Developers are keen to exploit “brownfield” spaces. Þorvaldur Gissurarson, owner and chief executive of ÞGverk and Arcus companies, is building a Hafnartorg (“harbour city”) development of retail, offices and 80 apartments in prime downtown. “Downtown hasn’t had that high density we see in many countries due to city planning issues restricting the number of apartments, and prices. The city [authority] needed to change.”

Companies are also on board. Last year, the Icelandic centre for corporate social responsibility, Festa, encouraged 104 company leaders to sign a pledge to measure and reduce waste and emissions. Managing director Ketill Magnússon believes there’s genuine will to change, as well as cash-saving motivations, and adds: “This is something capitals in the Nordic region are doing – there’s peer pressure between mayors.”

One of those corporate leaders who signed the pledge was Erna Eiríksdóttir, senior manager of investor relations at Eimskip shipping. She said waste and energy reduction make business and environmental sense. Its long-distance ships cannot currently be electric powered (although Iceland is installing electric chargers for fishing vessels). “We should be able to do it if we motivate each other, but we may have to compromise between convenience and what it costs in time,” she says.

As well as tourists, better green credentials could also increase the city’s attractiveness as an international conference location halfway across the Atlantic, says Áshildur Bragadóttir, director of Visit Reykjavík tourist body. “We have the geysers, great water pools, glaciers, volcanos – the landscape is constantly changing because of eruptions, earthquakes and climate change. In Reykjavík, I think we are more concerned about nature than perhaps other nations because we are so connected to our island, landscape and natural wonders.”