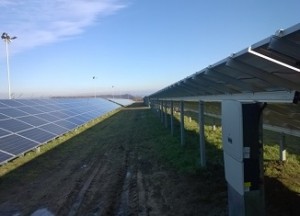 An upsurge in new wind, solar and hydro plants and capacity saw renewable energy smash global records last year, according to a report on new supply.

Some 147 Gigawatts of renewable electricity came online in 2015 – the largest annual increase ever and as much as Africa’s entire power generating capacity.

Clean energy investment increased to $286bn (£198bn), with solar energy accounting for 56% of the total and wind power for 38%.

Overall, more than twice as much money was spent on renewables than on coal and gas-fired power generation ($130bn in 2015), the REN21 global status report found.

Christine Lins, REN21’s chief, said: “What is truly remarkable about these results is that they were achieved at a time when fossil fuel prices were at historic lows, and renewables remained at a significant disadvantage in terms of government subsidies. For every dollar spent boosting renewables, nearly four dollars were spent to maintain our dependence on fossil fuels.”

For the first time, emerging economies outspent richer nations in the green energy race, with China accounting for a third of the global total. Jamaica, Honduras, Uruguay and Mauritania were among the highest investors, relative to their GDP.

African and Latin American countries also set some of the world’s most ambitious targets for clean energy deployment last year, the report says.

But the renewables revolution stuttered in many developed countries, with the significant exception of the US. In Europe, investment plummeted by 21% after the withdrawal of policy supports, such as clean energy subsidies and binding targets.

Despite this, renewables still provide 44% of the EU’s electricity capacity, and 15% of its final energy consumption.

Jean-François Fauconnier of Climate Action Network Europe said the report should be a “wake up call” to the European commission, spurring increased 2030 renewable goals in a review later this year. “The EU is at risk of missing the ongoing energy revolution and lagging behind other leading economies for decades,” he said.

The UK saw a 25% rise in renewable energy investments last year, the paper finds. But figures for the first quarter of 2016 suggest this may not survive cuts to solar subsidies and a slowdown in onshore wind planning approvals.

Steve Sawyer, GWEC’s secretary general said: “A record 63.5 GW of wind power was installed worldwide in 2015, demonstrating the maturity of the sector; and showing how renewables are supplying competitive, reliable and clean energy to fuel economic growth and cut CO2 emissions.”

Around the world, 8.1million people are now employed in the clean energy industry – excluding hydropower – 3.5 million of them in China. In the US, more people now work in the solar industry than in oil and gas extraction.

While employment in the clean energy sector grew by 6% in 2015, jobs in the oil industry contracted by 18%, according to the International Renewable Energy Agency.

But the fast-maturing renewables sector still has to overcome storage limitations, and the world’s dependence on infrastructure systems geared towards fossil fuels.

Arthouros Zervos, the chair of REN21 said: “The renewables train is barreling down the tracks, but it is running on 20th-century infrastructure – a system based on outdated thinking where conventional baseload is generated by fossil fuels and nuclear power.”

A build-out of decentralised and community-based generation was urgently needed to accelerate the clean energy transition, he said.