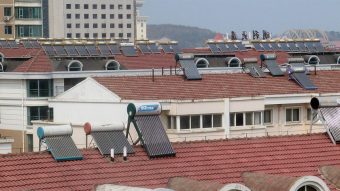 While energy use is commonly associated with lighting or transportation, more than half of the world’s energy consumption serves a simple function: heating things. This ranges from heating homes and buildings, to firing up industrial production, or even cooking. And because heat is mostly produced by burning fossil fuels, heat production accounts for almost half of the world’s carbon dioxide emissions.

Yet unlike power or transportation, heat remains widely under-served by renewable sources of energy. The share of renewables in electricity generation will rise to 28% in five years according to the latest forecast by the International Energy Agency. By contrast, the share of renewable heat is forecast to reach only 8% by 2021.

This means there is tremendous potential for improvement. Almost 80% of energy demand in the buildings sector is for heat but renewables only account for 9% of heat demand, mostly in the form of modern bioenergy. But concerns about local pollution from bioenergy use and high upfront costs remain serious challenges to further deployment in that sector.

One technology that is growing is solar water heating (SWH), which is projected to account for the highest proportion of demand growth in coming decades, according to World Energy Outlook 2016. Thanks to falling costs and more efficient technology, SWH has grown by about 17% a year since 2000, although it still accounted for just 6% of hot water production in the buildings sector worldwide in 2014. 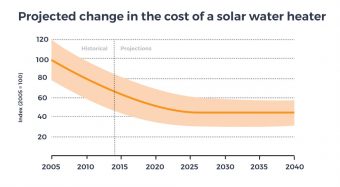 Today, the potential for lower SWH costs lies mainly in equipment and manufacturing. These can be improved by economies of scale – for example from their use in district heating – simpler designs, development of more manufacturing capacity and use of better techniques, including automation. While the initial cost is higher than gas or electric boilers, operating costs for SWH are much lower, even when electricity is used as a backup.

Developing countries represent more than 90% of the growth in water heating demand over the next 25 years. This is particularly true in areas with a combination of significant solar resources and underdeveloped electricity infrastructure.

The types of policies necessary to encourage renewable heating depend largely on the characteristics of the country. Carbon taxation can be a cost-effective strategy through providing price signals to move away from fossil fuels. This has been demonstrated in Sweden, where the introduction of carbon taxation in 1991 resulted in district heating moving from heating oil to biomass.

While targets are important for providing a sense of direction, their implementation will depend on effective policies. Yet once again, the global landscape for renewable heat policy measures is significantly less extensive than for electricity. The joint IEA/IRENA renewable policy database lists 582 policy instruments in force for renewable electricity, yet only 158 for heating and cooling across 75 countries.

Governments will need to take advantage of falling costs and enact policies that encourage renewable heating if the second chapter of renewable energy is to be written in time to meet global climate goals.