Energy future in the construction of wind farms

Various renewable energy sources together with all the measures for improving of energy efficiency and energy savings represent the only solution for the most urgent and radical reduction of greenhouse gas emissions caused by burning fossil fuels, deforestation, and land clearing for agricultural purposes. 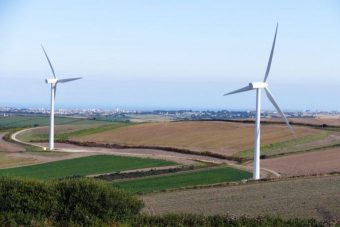 While wind undoubtedly falls into cheap and highly profitable form of renewable energy sources which is increasingly being used throughout Europe for the production of electricity, Serbia is not at top of the list of the countries that have extremely high degree of exploitation of the wind potential. However, of all available renewable sources in Serbia, gusts of winds have the smallest potential no matter how forcefully they seem.

Yet, this does not mean that there are no areas in Serbia where wind energy can be used. On the contrary.

Where are the best locations for the construction of wind farms?

The greatest potential of wind energy in Serbia is in the area of Koshava wind such as South Banat and East Serbia, then the eastern side of Kopaonik, Zlatibor, Pester and the areas of mountain passes at the altitudes above 800m, as well as in the valleys of the Danube, Sava and Morava.

The maps of average wind power and wind energy developed by the Institute for Multidisciplinary Research of the University of Belgrade as part of their study Global Assessment of Wind Energy Potential in Serbia from 2010, which you can find here.

There is also the Study “The Atlas of Winds of the Autonomous Province of Vojvodina” from 2010 that was prepared by a research team from the Faculty of Technical Science in Novi Sad.

What are the basic conditions for the production of electricity from wind?

The basic parts of wind turbine that are needed for the production of electricity are rotor blades, transmission system, generator, tower, and transformer which is necessary for connecting to the grid. Diameter of rotor can be up to 120 m, while the weight of one blade can be up to 20 tons and the hight of the tower with wind generator up to 130 m. The entire wind turbine can weigh around 200 t.

First you need to measure the wind speed which depends on the configuration of the terrain, facilities on the ground and their height in order to check if there are conditions for the installation of the wind turbine on a particular location.

The first condition is satisfied if the wind blows at the speed from 3 m/s up to 25 m/s. However, you should bear in mind that it is necessary that wind blows at least 2800 hours a year at an average speed of over 6 m/s (a year has 8760 hours), in order to take a particular location into consideration for the construction of wind farm.

It is very important that the investor is familiar with the necessity of the continuous wind speed measurements in a time span of at least a year, because only in this way it is possible to accurately estimate how much electricty would be produced at the considered location.

Take a look at the direction of movement and wind speed in our country in real time on this link.

What are the predictions about the degree of wind power utilization?

By 2030 wind should enable the production of a quarter of the total electricity produced in European Union which would definitely secure European energy system. Currently, more than 11 per cent of electricity is obtained from this source. If you take into account the fact that 44 per cent of all newly built last year’s power plants in European countries use wind for the production of electricity, it is quite clear that this source of energy takes on primacy.

Here you can download the Report on the energy potential of wind on land and sea in Europe (in English)  which was prepared by the European Environment Agency.

The first wind farms in our country were built in the last few years. Until recently we had just one wind farm in Tutin of 500 kW, during the last year two more wind generators were put into operation of total power of 16.5 MW, and in the meantime the Government of the Republic of Serbia has given a green light for the construction of wind farms in Kovin, Kovačica, Alibunar, Plandište and Vršac. However, the construction of large wind farms in Serbia obviously belongs to the future.

The prescribed quotas of the Government of the Republic of Serbia for wind farms that are valid until the end of 2020 are 500MW, and based on numerous studies it was established that Serbia could obtain around 2.5 billion kWh of electricity by using wind power.

On the website  of the International Rewable Energy Agency’s (IRENA) you can find a lot of information on wind energy – from graphs with a comparative overview of turbine prices around the world to the obtained amount of wind energy in our country.

All the adventages of investing in the construction of wind farms

* From the moment of obtaining the status of a privileged electricity producer, the investor is guaranteed the incentive purchase price for the produced electricity in the period of 12 years, and the investment return period ranges from 7 to 9 years. Here you can find here the Decree of the Serbian Government on the conditions and procedures for obtaining the status of privileged producer of electricity from renewable energy sources.

In the table below you can find the current incentives for the produced electricity from wind farms.

Download the Decree on incentives for the production of electricity from renewable sources and from high-efficiency cogeneration of heat and power.

* Wind generator can be installed on unused or infertile soil if the basic condition in that area is met, which means that winds that are strong enough blow in the area and at the required height

* The turbine itself takes up small area on the ground

* Wind farms can even be a touristic attraction

How much does a wind turbine cost?

How to get to the information on the available capacity within the prescribed quota for wind farms?

To find out how much of the prescribed 500 MW  is really available to new investors in wind farms, it is not enough to just to look at the total installed power at the bottom of the register of privileged and temporarily privileged electricity producers from wind power plants which you can find on this link.

Planned capacity of the power plants of these investors as well as those whose status is “temporarily privileged” stands the phase “invalid”, automatically becomes available for new investments.

Therefore make sure to check how much time has passed from obtaining the decision on temporarily status by clicking on the identification number in the register or on the number of decision that is next to the name of the investor marked in the above mentioned way.

In addition to the already installed power based on the issued statuses of privileged producers, the projects for additional 500 MW have been prepared and the investors hope that the Government will bring a regulation on the increase of quotas.

You can find on this link the list of requirements for the status of temporary and privileged producer for wind farms.

A detailed guide for investors in wind farms Construction and Electricity Generation in Wind Turbine Plants in the Republic of Serbia which was developed by the Ministry of Mining and energy and the United Nations Development Program (UNDP) can be found here.

How to check the cost-effectiveness of investments in wind farms?

While the wind energy can be used in many ways – for sailboats, irrigation and drainage or for the production of mechanical energy in windmills – thus achieving significant savings, you can only have a concrete profit only by converting  wind energy into electricity in wind turbines that are connected to the grid.

However, a comprehensive check of investment’s feasibility in the wind farm should be entrusted to experts who have already prepared feasibility studies and conceptual design projects in this field and who are familiar with the procedures for obtaining the status of a privileged electricity producer and have the experience in preparing the necessary technical documentation.

If you have any questions about the investing in wind turbines, write an email to us at info@nergetskiportal.rs and we will do our best to give you the response from our experts as soon as possible.

Ministry of Mining and Energy

Energy Agency of the Republic of Serbia

Ministry of Construction, Transport and Infrastructure

Provincial Secretariat of Vojvodina for energy, construction and transport

The registry of the privileged producers of electricity