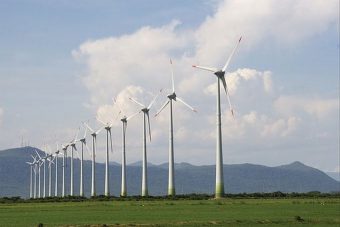 Wind power has set a new record in the UK, topping 10GW of output for the first time according to the latest data from Drax Electric Insights.

Wind energy first broke the 10GW mark earlier this week, but continued its record-breaking streak today, hitting a high of 13.5GW at the time of writing.

At points over the last 24 hours, wind was supplying up to 42 per cent of UK electricity demand.

It is the latest in a string of record-breaking results for the UK renewables industry. In 2017 the sector smashed 13 clean energy records, prompting campaigners to dub it the “greenest ever year” for electricity production.

Analysts welcomed the news, heralding it as a further sign of the growing dominance of clean energy sources on the UK grid.

“Breaking short-term output records on top of monthly and annual figures clearly shows that wind is now a major part of the UK electricity mix, and will continue to be in the future,” Dr Jonathan Marshall, energy analyst at the Energy and Climate Intelligence Unit said. “Claims that the grid would be unable to handle five, 10 or 20 per cent wind power have been shown to be well wide of the mark.”

However, a slump in clean energy investment suggests tougher times ahead for the sector. A Bloomberg New Energy Finance report released yesterday revealed the UK suffered the steepest fall in investment of any major economy in 2017, as spending fell 56 per cent to $10.3bn.

The result prompted fresh calls from MPs, campaigners, and business leaders for the government to step up efforts to mobilise investment in new clean energy capacity, including low cost onshore wind and solar farms.