Environmentalists are alarmed by recent data that reveals Spain’s pig population now outnumbers its human one by 3.5 million. This is the first time the number of pigs in Spain has exceeded that of humans, and the discrepancy is adding to concerns about the environmental impact of the pork industry. This impact stems primarily from greenhouse gas emissions, nitrate discharges, and water consumption. 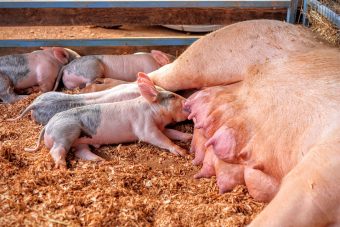 The number of pigs in Spain has increased by nine million in the last five years; in 2017 alone, Spain’s pork industry produced about four million tons of pork products. Environmentalists are calling on producers to slow down, and for good reason. Each pig in Spain drinks close to four gallons of water per day, and the total amount consumed is enough to satisfy the water needs of Spanish cities Zaragoza, Seville and Alicante combined. Pig farming also contributes to greenhouse gas emissions from livestock overall, which is the fourth-largest emissions generator in the country.

The enormity of the industry also makes it difficult to regulate. “When you don’t control an industry in which traditionally there’s a lot of fraud, because there’s a lot of demand but not a lot of product, this is what happens,” said Francisco Espárrago, a jamón ibérico de bellota producer in Extremadura, in reference to numerous quality control issues that have plagued Spain’s pork industry. It appears that stricter – or perhaps better enforced – regulations would benefit Spain’s longstanding pork traditions that have existed since Roman times, protect local producers, and alleviate environmental infractions which are cause for national concerns.