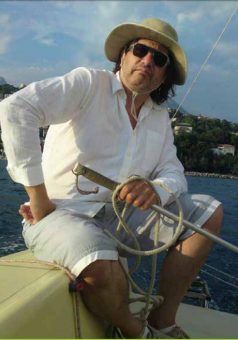 We are definitely sure that there is no person in this region who hasn’t heard of Rambo Amadeus, a great musician, poet and a “media manipulator” as he describes himself. In the interview for Energy portal, he revealed to us how far did he come with his project “Solar Retro Sailboat”, why hybrid vehicles are the best choice for each driver at the moment, but also why it is important to preserve the cleanness of the sea, land and air for future generations.

EP: You, Rambo, are a great fighter for renewable energy sources and energy efficiency. What do you think why such view of the world is not something that is benevolent in the Balkans? Is it because people here are occupied with mere survival, is it media’s fault for insufficient reporting on the benefits of “green approach” or is it politicians’ fault? How can we change that?

Rambo Amadeus: Well, I definitely have a different perspective of the surroundings. Majority of common people are crying for reducing senselessly high energy costs. Rich Denmark consumes 5 times less energy per household on average, than we do.

On the other hand, owners and resellers of energy resources – the chosen number of people, that every reduction in energy costs directly strikes on their wallet, have a huge impact on government and that is the reason why the things go slowly or are not happening at all.

Common people understand that energy efficiency is good, but it is wrong to expect that the state or large energy systems will deal with that. Ordinary working people should do that by themselves for one simple reason because it pays off. You won’t see the commercials on TV for loans for energy efficiency, although the interest rates are much lower than for cash loans and even though all banks need to have them in their offers by the law. An individual must be persistent, he must make inquiries and find out what his rights and possibilities are. Google is an excellent advisor there.

EP: We know that your IndieGoGo campaign for modernization of solar sailboat is successfully finished and the targeted sum was collected. But, do you need more money? Has anybody else out of public figures or institutions supported you?

Rambo Amadeus: No, we do not need more money. UNDP Montenegro has allocated funds that are sufficient for finishing the boat. UNDP finances the boat until it is launched. We will probably need some funds to give salary to a young and capable skipper and he would be on duty on the boat. But we will think about that when we finish the boat.

I have to mention Montenegrin Telekom, which has been supporting sailing since last season. It helped me restore some legendary sailing boats which are the icons of Herceg Novi. Thus, UNDP finances us till launching and Telekom has announced that it is willing to help smoothly functioning of the boat in later stages. 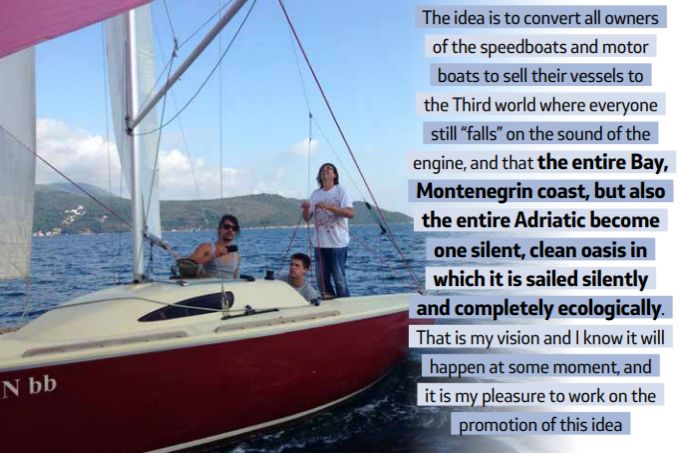 EP: Can you tell us something about the history of a sailing boat – cutter? On what drive did it move, apart from wind, when it was originally built?

Rambo Amadeus: It originally used oars and wind. It was used for the training of sailors and sailing officers in rowing and sailing. It was designed at the end of 19th century and at the beginning of the 20th century you could find it in more or less all navies of the world.

EP: How far did you come with the project? How much time (and money) did you spend? Do you and Nenad Bošković have a team of collaborators on the project or are you doing everything by yourselves?

Rambo Amadeus: So far we have bought a hull, a boat trough, the original design of naval cutter, but it was made with the best technology – the west system, in the shipyard ENAVIGO Virovitica.

The boat is now in the workshop in Herceg Novi, and the calculations were made by Srđan Đaković, an experienced shipbuilding engineer, specialized in sailing boats. The keel, a completely innovative and original design, was done by Ivan Erdevički, our well-known citizen of Herceg Novi, who has his own office for ships’ designing.

We are currently communicating with the Faculty of Technology in Belgrade, they will help us with the hydrodynamics of the keel’s sheets and the rudder’s sheet, and they will make that out of carbon. We are in parallel communication with the suppliers of the needed elements.

We are making boat cart for the sailing boat, so that we could move it smoothly.

The next stage is “sculpting” of the deck and cockpit. We have to make a model of the boat in a natural size, so that we could have it as I would say “for real”. None of 3D models and drawings can help there since you have a completely different impression when you have a model in a natural size in front of you.

So, now in June we made a model out of hardwood, adhesive tape and Styrofoam. A famous artist and my friend, Darko Vlaović will help us with the visual appearance of the deck, so that it is at the same time classical and retro with modern look and also ergonomic.

Igor Pjacun will take care of the ergonomics, easy accessibility of the commands, ropes, angles and halyards. He is a famous Adriatic skipper and competitor, a good friend of mine and one of the most experienced sailors I know.

EP: As announced, solar retro sailboat should be launched into the sea in spring 2018. You said that it is a good idea to sail around the Bay of Kotor and thus draw attention of other sailors, but also everyone else on the importance of preserving the sea and environmental protection. But, will the tourists have an opportunity to go for a boat ride?

Rambo Amadeus: Definitely. The idea is that after a while, the boat becomes sustainable, commercially used, that it can financially maintain itself and also bring salary for one sailor, skipper.

Read the whole interview in the new issue of the Energy portal Bulletin on Ecomobility.