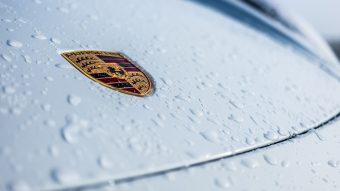 Porsche is investing more than €15 million in new facilities in the German capitol region in and around Berlin. Part of that investment is represented in a pylon that stands in front of the company’s newest branch office known as the Porsche Center Berlin-Adlershof. The 80 foot high, 20 foot wide pylon is more than a corporate symbol.

Covered in 8,000 solar cells contained in 260 solar panels, the pylon in front of the new Berlin headquarters is expected to generate more than 30,000 kilowatt-hours of electricity every year — enough to meet the energy needs of the entire building it sits in front off. The photovoltaic pylon cost $900,000 to build. Completed in 16 weeks, the finished pylon weighs 88 tons.

The solar pylon is also a powerful symbol of Porsche’s commitment to electric automobiles. It is working feverishly on the first such car — a fully electric 4 door sports car called the Mission E, due out in 2019. Porsche expects the Mission E to also serve as the basis for more electric car products in coming years.

The company is also incorporating plug-in hybrid technology into several of its traditional models, starting with the Panamera sedan.

Don’t lose sight of the fact that Porsche is owned by Volkswagen, which has reclaimed its title as the largest auto manufacturer in the world, a distinction it lost in the aftermath of the diesel emissions cheating scandal that swept over it beginning in September, 2015. So, everything Porsche knows about building electric cars, Volkswagen knows, and vice versa.

One area critical to the success of electric cars that Porsche is anxious to address is high-speed charging infrastructure. Porsche CEO Oliver Blume told Top Gear last fall, “We are in contact with other manufacturers and suppliers around the world to build a fast charging network. Everybody has the same need. It sounds easy but getting the details agreed is hard. We already have the clear technical concept. It can even work with Teslas, with an adapter.”

The new Berlin office also features one of these high-power superfast-charging stations. The charging cords are water cooled, can charge various types of cars (including Teslas, with an adapter), and have a max power output of 350 kW (compared to the ~120 kW of a current Tesla Supercharger).

The charging station is supposed to be operational in autumn, but it’s not clear yet if Volkswagen or Porsche will have any EVs capable of going above 100 kW in the coming year or two.

Elon Musk once begged other carmakers to build “compelling electric cars.” Porsche says it is up to the challenge and anxious to join the ranks of top electric car manufacturers.