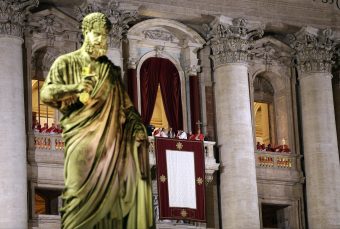 Pope Francis, long known for his commitment to environmental stewardship, has taken his call for climate action one step further. He now owns an electric car, a Nissan LEAF.

The LEAF was given to the Pope in late February by German asset manager and mathematician Jochen Wermuth. The Pope’s Nissan LEAF can travel up to 107 miles with a 30 kilowatt-hour battery. Wermuth tried to give the Pope a Tesla Model S electric limousine but the Pope preferred a smaller vehicle. The two men took a small test drive through the Vatican. Wermuth drove and the Pope sat next to him in the front seat.

Pope Francis is “the last superstar of mankind,” Wermuth said. He also described the Pope as an example for other heads of state as well as every man on Earth.

Wermuth’s connection with the Vatican extends beyond this eco-friendly gift. Wermuth’s asset management firm is working with the Vatican to update the Holy See’s investment strategy in line with the Pope’s climate views. They are using his 2015 encyclical, Laudato si’: On Care for Our Common Home, as a guide.

“Humanity is called to recognize the need for changes of lifestyle, production and consumption, in order to combat this warming or at least the human causes which produce or aggravate it,” the Pope said in his encyclical.

Wermuth is known for giving the largest donation ever to the Greens, Germany’s environmental party. The 47-year-old Protestant supported the Greens’ election campaigns in Berlin, Baden-Württemberg and Mecklenburg-Vorpommern, donating around $630,000. Wermuth worked for Deutsche Bank in Russia in the 90s and is now a proponent of divesting from fossil fuels, Spiegel Online reported.