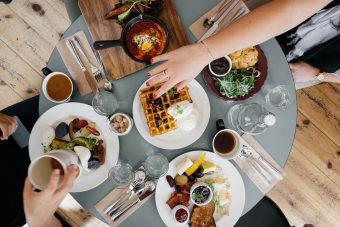 The finding is part of a Global Burden of Disease Study published in The Lancet Wednesday that looked at dietary habits in 195 countries between 1990 and 2017. It concluded that one in five deaths per year worldwide could likely be prevented by a better diet. In 2017, poor diet led to 10 million deaths from cardiovascular disease, around 913,000 from cancer and around 339,000 from type 2 diabetes.

“Diet is an equal-opportunity killer. People — independent of age, gender, country of residence and socioeconomic status — to some extent are affected by poor dietary habits,” study co-author and assistant professor of health metrics sciences at the University of Washington’s Institute for Health Metrics and Evaluation (IHME) Dr. Ashkan Afshin told Time. “Low intake of healthy foods and high intake of unhealthy foods is the leading cause of mortality, globally and in many countries.”

Researchers drew their conclusions by looking at 15 types of foods or nutrients, assessing the ideal and actual intake of each food, determining how consuming it increased or decreased health risks and then calculating each food’s contribution to global health outcomes. In general, the researchers found that not eating enough healthy foods was more of a problem than eating too many unhealthy ones. While eating too much sodium was a major risk factor for mortality, and the leading risk factor in the East Asia and wealthy Asia Pacific regions, eating too few whole grains was the leading risk factor for death in the vast majority of regions studied. Not eating enough fruit was also a major risk factor. Overall, diets high in sodium and low in whole grains led to around three million deaths each in 2017, while diets low in fruits contributed to around two million. Taken together, the three were responsible for more than 50 percent of deaths caused by poor diet.

Other factors were also important: diets low in vegetables, nuts and seeds and omega-3 fatty acids was responsible for more than two percent of global diet-related deaths each. Afshin told Time that results had important implications for crafting health policy and advice, since people might be more likely to add a healthy item to their diet than subtract an unhealthy one.

“While sodium, sugar, and fat have been the focus of policy debates over the past two decades, our assessment suggests the leading dietary risk factors are high intake of sodium, or low intake of healthy foods, such as whole grains, fruit, nuts and seeds, and vegetables,” Murray told The Guardian. “The paper also highlights the need for comprehensive interventions to promote the production, distribution, and consumption of healthy foods across all nations.”

Afshin told The Guardian that countries with a Mediterranean diet, long touted for its health benefits, did have the best outcomes.

“But no country has an optimal level of consumption of all the health foods. Even in countries that have a Mediterranean diet, the current intake of many other dietary factors is not optimal,” he said.

However, shifting the whole world to a healthier diet cannot be a matter of individual choice. A study recently published in PLOS One in October 2018 found that if everyone ate the recommended amount of fruits, vegetables and whole grains, there would not currently be enough of the healthy items to feed everyone. That is because global agriculture currently produces too many fatty, starchy or sugary foods.

“We simply can’t all adopt a healthy diet under the current global agriculture system,” co-author of the PLOS One study and director of the Arrell Food Institute at the University of Guelph Evan Fraser told NPR. “At a global level, we have a mismatch between what we should be eating, and what we’re producing.”

Changing production in line with nutritional guidelines would also be good for the planet. Another Lancet study published in January found that transforming the global food system to shift diets towards fruits, vegetables, whole grains and pulses and away from meat and sugars could feed 10 billion people by 2050 while fighting climate change.