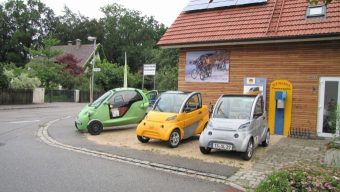 Car manufacturers welcome plans by the EU to boost the convenience of electric cars by increasing recharging facilities.

Every new or refurbished house in Europe will need to be equipped with an electric vehicle recharging point, under a draft EU directive expected to come into effect by 2019.

In a further boost to prospects for the electric car market in Europe, the regulations due to be published before the end of the year state that by 2023, 10% of parking spaces in new buildings in the EU zone will also need recharging facilities.

The EU initiative is intended to lay the infrastructure for the sort of electric car boom envisaged by Norway and the Netherlands, which both plan to completely phase out vehicles with diesel engines by 2025.

As well as extending the driving range and convenience of electric cars, the mushrooming number of recharge stations would allow vehicles to feed their electricity back into the grid.

That in turn would open the door to a futuristic world in which cars supply energy to Europe’s power network at all times of the day and night, balancing shortfalls from intermittent renewable energies when the sun is not shining and the wind not blowing.

“This kind of market stimulus is not just positive, it is mandatory if we want to see a massive rollout of electric vehicles in the near future,” said Guillaume Berthier, sales and marketing director for electric vehicles at Renault, which recently unveiled an electric vehicle with a 250-mile range. “The question of how you recharge your car when you live in an apartment within a city is a very important one.”

The EU moves are designed to help cut roadside emissions, however, in the short term they may lead to a higher than expected sulphur dioxide (SO2) emissions from road transport by 2050 according to a recent report by the European Environment Agency (EEA).

Magda Jozwicka, the project manager of the EEA’s research, said there would be a five-fold increase in SO2 emissions by 2050 from electricity production compared to a situation with no electric vehicles. Although this assumption was based on the current energy mix projected by the European commission, which includes coal-burning power plants.

The EEA report, which calls for new sulphur dioxide abatement measures in the EU, also says that the additional power demand from a burgeoning electric vehicle sector, which is predicted to account for 80% of cars by mid-century, will strain supply capacity.

This could require the construction of 50 new power stations across Europe by some estimates.

Martin Adams, the head of the EEA’s air pollution unit said: “A higher amount of electric vehicles will need additional power to be generated. The source of this extra energy is of prime importance. It is clearly feasible that we use clean renewable sources but when you think of where the different countries are at, I think some fundamental decisions are needed to develop a more sustainable energy system across Europe.”

The French carmaker Renault said that it accepts that electricity supply problems could emerge as the vehicles’ market share increases exponentially, although it sees a solution.

“We could make a huge investment to green our electricity but I personally think the future will be built around local storage with a second life battery,” Berthier said.

Vehicle batteries that have worn down still contain energy which can be topped up with energy from on-site wind and solar power generators and sold back to the grid at peak times.