Pesticides and weed killers have their benefits. They are beneficial in reducing or eliminating pests that damage or destroy crops. Yet they can wreak havoc with entire ecosystems. 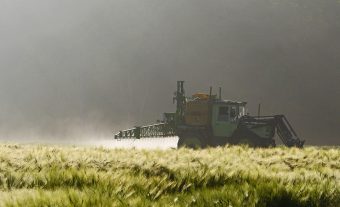 Worse: their effects can linger long after their use has ceased. Just how pervasive pesticides can be has been confirmed by two researchers at the University of Wageningen in the Netherlands, who have analyzed 317 surface soil samples from 11 countries in Europe for traces of pesticides.

They concluded that 83% of the samples contained pesticide residues with 76 different types of compounds. “Some 58% of that percentage were mixes of pesticides, as opposed to 25% which came from a single type of substance,” they explain in a study. “Glyphosate, DDT (banned since the 1970s) and broad-spectrum fungicides were the main compounds detected.”

The persistence of pesticide residues in the soil across Europe illustrates the need for understanding various pesticides’ potential environmental impacts, the better to mitigate against them. This is especially important because pesticides do not just stay put in the soil, there to accumulate. They can easily be blown away by winds and washed away by rainwater, thereby spreading farther afield or contaminating water sources.

Pesticides can also have grave consequences for human health. Many commonly used pesticides are highly toxic and exposure to them can cause a number of ailments from skin irritation to allergic reactions. Exposure to pesticides has also been linked to debilitating illnesses from acute respiratory problems to various forms of cancer.

The solution, the researchers explain, lie in more prudent farming practices and cultivation techniques conducted with proper care and forethought. The measures can include switching to non-persistent pesticides, bio-stimulants and organic composts or else diversifying cultivated crops so as to achieve more balanced insect populations and a reduction in the number of pests.