Twenty years ago, he won the affection of a broader audience with the role of Brando in the television serial “Family Treasure”. Since then, Vojin Cetkovic has shown that he is equally able to play different and demanding roles: bad guys, monks, poets and recently he added the role of the first crowned Serbian king – Stefan the First-Crowned in the TV serial “Nemanjici – the Birth of the Kingdom”. Although it is expected to talk to him about his rich career and plans, we decided to ask him about his love for fishing, black storks and white-tailed eagles that land in the vicinity of his energy-efficient vacation home, but also about the things which drive him to participate in the activities of clearing illegal landfill in National Park Fruska Gora. 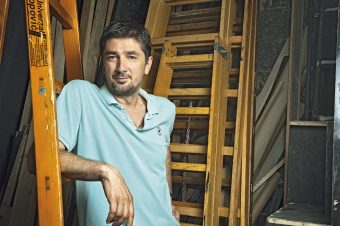 EP: When did you decide that you were tired of city life and was the love for fishing crucial for the construction of your vacation home in Cortanovci municipality, on the Danube bank?

Vojin Cetkovic: It was my need made all the difference. I have been fishing since I was five. I was lucky to have grandparents who lived in the village, thus I spent a lot of time there, and my parents constantly took me into nature. Since my childhood, I have been attached to nature, animals, and especially plants and rivers. My parental grandfather had an entire hill above Mojkovac, where he lived, so it was most logical for me to find a place for my vacation home which is close to a hill and a river. Thanks to my friend from the kindergarten Novica, who has a vacation home in Cortanovci, we often visited him there and I liked the place very much. He found a plot for me. At first, the Danube could not be seen due to the shrubbery on the plot, but when I cleared it, one of the most beautiful panoramas appeared in front of us. Now I have a boat on the Danube and a house with the view. 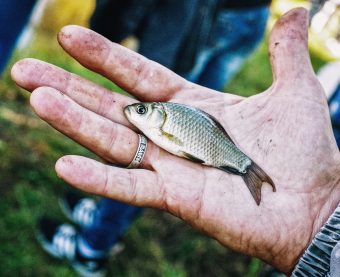 EP: Since we are not a nation that takes much care of nature it is not difficult to come across the daily evidence of our negligence. What is the thing that especially worries you while you are fishing?

Vojin Cetkovic: Everything bothers me, and above all the consciousness of people. Some fishermen often do not know where they are, and they say they love the river. Recently, I saw a father who thought his son how to catch a pike during the prohibition period and not to mention the size of the pike which was well below the allowed dimensions. What are you supposed to say to that man?

I have seen everything on rivers; poachers, nets which should not be in small rivers. Unfortunately, without harsh laws and without the application of these laws, nothing can be done. That is what bothers me the most. It also bothers me that the state was negligent because the damage is huge and almost irreparable. Twenty years ago, in the kilometer of the river flow, there were around 800 kilograms of fish. Today it is less than 80 kilograms. The data on the amount of fish in the see is equally shocking. 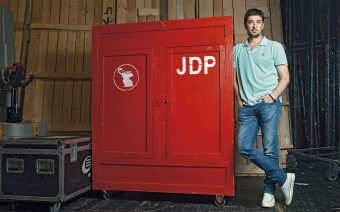 Since I am a public figure and I have the chance to be heard by people, I feel that my duty is to talk about ecology and somehow change the consciousness among people. That would be my huge success, and I have given that task to myself. I have often responded to working actions for cleaning of lakes and rivers, and within a project, we tried to stock the Drina with huchen. There were many difficulties in the implementation of this project, and there were some constant excuses that were mostly related to the difficult economic situation. I also spoke with some guards, who were willing to do their job well and to catch poachers, but they are in a difficult situation due to the threats they receive.

I read that Chapter 13 which is related to fisheries should be opened. If all the laws were implemented as well as the requirements which the European Union requires from us and if only ten people who committed offenses were punished, the situation would change dramatically.

In addition, we still have factories that throw out wastewater into rivers and canals and cause a lot more damage. It is necessary to install collectors, which is a large investment that will have to be implemented. I know very well both running and standing waters in Serbia and I can say that the situation in them is quite alarming. There are rare examples of certain parts of national parks in which some order exists, and in which stocking with young fish is carried out and fishing is controlled. According to my knowledge, the European Union has devoted enormous funds to ecology and I hope that it will be used for these purposes.

The Survival of Drina Huchen

At the initiative of Vladimir Grbic, the famous volleyball player and also a fishing enthusiast, a project was launched for stocking the Drina with huchen six years ago in which Vojin also participated. “The Pond in Perucac is built under the Perucac dam due to which it was not possible to establish a fishing route. The huchen could not go upstream of the Drina where it would spawn, thus its survival was questioned. Drina huchen is really unique and beautiful for sports fishing. We tried with the Ministry for Agriculture and Environmental Protection to make an agreement. We received the funds and managed with the help of ichthyologists, although it was very difficult, to let a certain number of huchen in the Drina”, says Vojin and he explained to us that the huchen, this natural rarity, which exists in Serbia, Montenegro, Bosnia, and Slovenia, were produced in artificial conditions and were returned back into the Drina. Unfortunately, the project did not last for long. Now that pond serves for commercial purposes.

Read the whole interview in the new issue of the Energy portal Magazine on SUSTAINABLE ARCHITECTURE, July 2018.