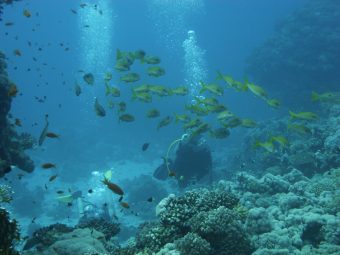 Rising sea surface temperatures are having a devastating effect on coral reefs, many of which are forecast to see severe coral bleaching for an unparalleled fourth year in a row.

In Australia, a heatwave which has caused record-breaking temperatures and wildfires, has also meant no relief for the Great Barrier Reef, which was ravaged by heat-induced bleaching last year, killing swathes of the coral.

The Australian Marine Conservation Society (AMCS) has called for government action to address the problem which is expected to worsen as temperatures rose above 47C in parts of Australia.

Satellite thermal imaging of the area has revealed that waters are unusually warm, and the reef has been put on red alert for further significant bleaching.

AMCS Great Barrier Reef Campaign Director Imogen Zethoven said: “Signs of new coral bleaching in February, plus the likelihood of extensive severe bleaching and even mortality in the next four weeks, is extremely concerning.”

The society has called on the Australian government to end its support for the coal industry and begin a “rapid move to renewables”.

Last month, Japan’s environment ministry reported that over 70 per cent of the country’s largest coral reef was “dead” after sea temperatures were between one and two degrees Celsius higher than normal.

Coral bleaching occurs when stresses such as higher water temperatures cause the corals to expel symbiotic photosynthetic algae, draining them of all colour and eventually causing them to die.

Coral bleaching is not uncommon, and bleaching events usually occur somewhere on the planet every year. However, the increasing frequency of the shocks mean the coral does not have adequate time to recover.

The current global coral bleaching event is the longest and most widespread ever recorded.

A 2016 study into the phenomenon predicted that annual severe bleaching events could become the norm by 2043.

Dr Gareth Williams of Bangor University, who worked on the study, told The Independent that though the situation was “terrifying”, action can be taken to help prevent catastrophic loss of coral.

He said: “There’s a double edged sword at the moment, and humans are at the root of both problems.

“Evolutionary processes mean [the coral] is designed to take environmental shocks. Key processes help them to recover between these events.

“But many of our local impacts such as fishing and pollution are eroding those critical recovery functions.

“And the second problem, which is more terrifying, is that the speed they are getting hit with environmental shocks is increasing. Even if those recovery mechanisms are in place so that the reef can recover in between shocks, the shocks are coming so close together there’s not even time for these processes to kick in.”

Dr Williams said that the problem was not just confined to reefs close to human activity, but warming seas are also having an impact on coral in some of the planet’s most isolated areas.

“If you go to some of the world’s most remote reefs, away from direct human impacts such as fishing and pollution, they are still suffering the effects of these warmer conditions,” he said.

“The critical thing here is that we have to tackle global climate change. But what will save coral reefs is a planet-wide multi-government co-ordinated effort to reduce greenhouse gas emissions.

“There’s huge danger in thinking we can climate-proof coral reefs. That’s a dangerous idea. We have to start tackling the root cause of this, and the root cause is global climate change.”

He added: “The Paris agreement is good example of a co-ordinated effort to try and curb greenhouse gas emissions, and if we stick to it, it will reduce greenhouse gases, but even if we adhere to it, it won’t buy that much more time for reefs.

“It’s optimistic at best. We need to go beyond the Paris agreement. But of course we have to start somewhere.”