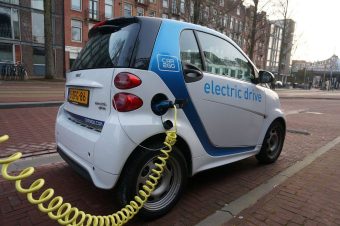 The initiative, which kicked off earlier this week, is thought to be one of the largest of its kind anywhere in the world.

In particular, it is designed to help residents of Oxford living in the city’s narrow terraced streets where parking is often on the road and based on availability, making the installation of personal charge points very difficult.

“The project has global scientific significance because we know surprisingly little about how electric vehicle users and local communities adapt to new charging infrastructure, especially if this is provided on residential streets where availability of a parking space is not guaranteed,” Dr Tim Schwanen, director of University of Oxford’s Transport Studies Unit, said of the project.

The first phase will involve the installation different charging technologies and access arrangements to see which is most effective at encouraging EV uptake among urban and rural residents.

This will see 30 charging stations installed – 10 for the general public, 10 for members of a Co-Wheels Car Club and 10 for individual households. These will be up and running by October, and after a 12-month trial the most successful solutions will be rolled out at around 100 sites across Oxford’s residential streets.

“The pilot element of the project is a learning experience – identifying the best charging solutions for different situations and locations and using our assets in better, smarter ways will help minimise costs,” Ian Hudspeth, leader of Oxfordshire County Council, said in a statement. “We hope to take what we have learnt from this project and look at how we can support on street charging across the whole of Oxfordshire.”

Meanwhile officials at the City of London are planning the first green taxi ranks with EV charging points later this year. Planning documents, first reported on by Bloomberg, suggest the first on-street taxi charging in the square mile will be located on Noble Street and Ropemaker Street, next to the headquarters of banking giants Lloyds and Macquarie.

The 22kW chargers, known as “semi-rapid chargers”, will be able to “top up” an electric taxi’s charge by around 40 per cent in just over half an hour. Final decision on the installations are expected later this year.