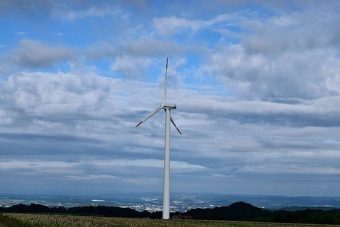 The Race Bank Offshore Wind Farm has been long in the making, having been first proposed back in 2004 by developer Centrica before being sold to DONG Energy (now named Ørsted) for £50 million in December of 2013. Delays nevertheless followed and construction didn’t begin until July of 2016. Located approximately 16.8 miles off Blakeney Point on the North Norfolk coast, the 573 MW (megawatt) Race Bank Offshore Wind Farm is made up of 91 wind turbines and generates enough electricity to power over 500,000 UK homes and save over 830,000 tonnes of CO2 each year.

Wind turbines for the project were provided by Siemens, which was announced as the provider in July of 2015. The 6 MW direct-drive turbines stand at 154 meters in height, many of which feature the first blades to be manufactured at Siemens Gamesa blade factory in Hull — which was opened back in December of 2016.

Last week, Ørsted confirmed that all turbine testing had been completed and the project had been ramped up to full generating capacity. The project has also already generated 1 terawatt-hour (TWh) of power since construction began.

“Full power and 1 terawatt hour of production are two fantastic milestones and have been achieved by the hard work and dedication of a significant number of people,” said David Summers, Project Director for Race Bank at Ørsted UK. “Full power means that Race Bank can now produce enough green energy to power over half a million UK homes.

“Not only have we achieved full power on schedule, but we have also done so safely, without compromising our high standards. I now look forward to completing final activities on Race Bank and being able to officially open the project in the summer.”