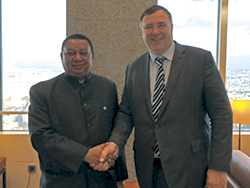 Mr. Barkindo exchanged information with Mr. Pouyanné on the recent landmark decision of 30 November 2016, and the subsequent Declaration of Cooperation between OPEC and participating non-OPEC producers reached on 10 December 2016.  He also described the extensive bilateral consultations that had taken place in the lead-up to these historic decisions – the first of their kind in decades – which aimed at restoring balance in the oil market.

In his comments, Mr. Pouyanné, who has been CEO of TOTAL SA since 2014, provided a synopsis of the company’s strategies and view of the oil market.  He commended OPEC’s achievements, together with other producing countries, and reiterated the necessity of these accomplishments for sustainable market stability in the medium- to long-term.

Senior officials and analysts from both TOTAL SA and OPEC held discussions on the prospects for energy and oil, with a focus on supply and demand, refining, gas and renewables, and climate change.  They also addressed future challenges in the energy sector under various scenarios.

Both parties agreed to continue such interactions regularly at both expert- and high-levels, with a view towards enhancing ongoing energy dialogue and cooperation.