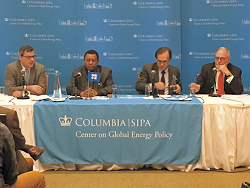 The Organization of the Petroleum Exporting Countries (OPEC) Secretary General, HE Mohammad Sanusi Barkindo, and an accompanying delegation, took part in a series of activities at the Columbia University’s Center on Global Energy Policy (CGEP) in New York on 15 December, the fourth day of his visit to the United States.

The Secretary General met with Director and founder of the Centre, Professor Jason Bordoff, along with deputies and professors of the Center. HE Mohammad Barkindo delivered a speech in the morning highlighting the Organization’s outlook on both medium- and long-term viewpoints of the energy market. The speech was followed by a presentation on the OPEC World Oil Outlook 2016. A question and answer session during a panel discussion included HE Mohammad Barkindo, along with Adrian Lajous, former CEO of Pemex and Antoine Halff, director of global oil markets. It was moderated by Professor Bordoff and attended by energy professors at the university, along with energy consultants and students.

During his speech the Secretary General commented on the rich history of the Columbia University, where some of America’s top leaders and prominent figures have their place among the alumni. He commented that the size, scope and complexity of the global oil market make it unique among physical commodities and that the “true scale of the industry underscores the importance of sustainable market stability.”

The Secretary General briefed the audience on the cycles the oil industry has seen, adding that the current cycle is the worst to date, with the OPEC Reference Basket falling by 80 per cent between June 2014 and January 2016.  The Secretary General expressed the need for the oil market to rebalance in order to reduce price volatility and support future investment, adding that the recent decisions by OPEC and non-OPEC countries on output adjustments will bring the rebalancing process forward much more quickly.

He spoke about the extensive consultations which took place with OPEC and non-OPEC countries that led up to the historic Algiers Accord at the 170th Extraordinary Meeting of the OPEC Conference, held on 28th September in Algiers, Algeria.

The Algiers Accord, in turn, led to the ‘Vienna Agreement’ decided upon at the 171st Meeting of the OPEC Conference on 30 November in Vienna, at which OPEC Member Countries decided to cut their oil output by 1.2 million barrels a day (mb/d), effective from 1st January 2017. This was followed by a meeting held in Vienna on 10 December, at which OPEC Ministers met with ministers and officials from non-OPEC countries, which resulted in 11 non-OPEC countries agreeing to reduce their respective oil production by almost 600,000 barrels a day.

In the afternoon the Secretary General participated in a CGEP workshop on the interaction between financial and physical markets, attended by leading bankers and investors and in the evening he took part in a dinner between major financial market stakeholders. HE Mr. Mohammad Barkindo will hold a similar group meeting with selected key participants in financial markets on 16th December to complement discussions on this important topic. 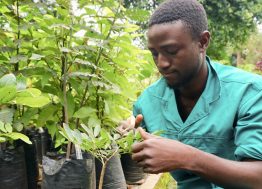