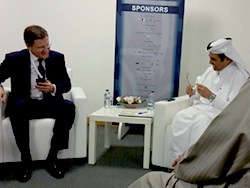 And separately, HE Barkindo met with the President of the Bolivarian Republic of Venezuela, HE Nicolás Maduro Moros, who gave a presentation to the WEC, one of the energy industry’s premier events, on Monday.

At the informal meetings, the officials discussed the situation in the international petroleum market and the possibility of taking further action towards helping to stabilize it.

Today, ministers and high-ranking representatives from both OPEC and non-OPEC Countries will meet to discuss the oil markets further.

The meetings in Istanbul follow OPEC’s landmark agreement reached in Algiers, Algeria on 28 September, when the Organization’s 14 Member Countries committed to reducing their overall output in support of securing a more orderly market.

The 170th (Extraordinary) Meeting of the OPEC Conference decided to opt for an OPEC-14 oil production target ranging between 32.5 and 33.0 million barrels/day, in order to accelerate the drawdown of the existing substantial overhang in oil stocks and bring the rebalancing of the market forward.

The output move will be discussed further at the 171st Meeting of the OPEC Conference, due to be held in Vienna, Austria on 30 November 2016.

The five-day World Energy Congress, which began on 9 October, has as its main theme ‘Embracing New Frontiers’.

According to the WEC, the event has brought together more than 10,000 participants, including world leaders, dignitaries from the fields of energy, industry, government, and international organizations, as well as universities and the media.