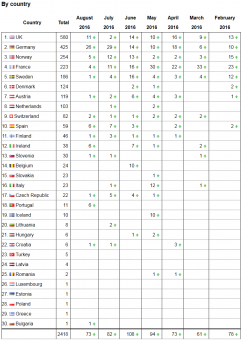 The average installation pace since Spring seems to be hovering around ~100 a month.

A significant characteristic of CCS Combo locations are that they are also multi-standard chargers, with both CHAdeMO and/or 3-phase AC type 2 along for the ride. Typical power output is between 20 to 50 kW.

The UK still has the most CCS compatible chargers at 580; but as you can see below, Germany (mostly thanks to its new incentive programs) is starting to chase down the lead this Summer, adding 55 units over the past 7 weeks, and now stands at 425 charging stations overall.