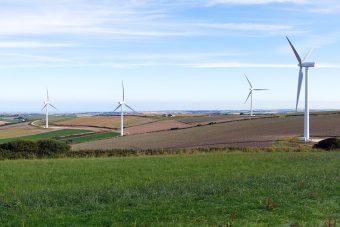 Strong November winds helped generate more than three quarters of Scotland’s electricity needs for the month, once again demonstrating the “success story” of the renewables sector north of the border.

Data released today by WWF Scotland shows wind turbines provided 77 per cent of Scotland’s entire electricity demand for the month, and supplied enough power to meet the needs of every Scottish home on 25 of November’s 30 days.

“Scotland’s renewable success story powered on during November,” said Gardner. “Over the course of the month Scotland’s windfarms generated the equivalent of 77 per cent of our total electricity demand. If we are to build on this success the UK Government must set out a route to market that encourages continued investment in onshore wind.

“Successive Scottish governments have set out a vision for renewables that has enabled the sector to flourish, drive down costs, create jobs and cut greenhouse gas emissions. The forthcoming energy strategy needs to build on this strong foundation and set out the ambitious vision and steps we need to take to heat our homes and make the transition to electric vehicles.”

It follows news last week that 43 per cent of electricity consumption in Wales in 2016 came from renewable power, up from 32 per cent during the previous year, according to official statistics.

The Welsh Government said data released on Thursday showed Wales was making “good progress” towards its goal of sourcing 70 per cent of its electricity from renewables by 2030, with the number of renewables projects up 23 per cent since 2014.

There are now 67,000 renewables projects operating in Wales, with capacity having increased by almost half since 2014 to make up 18 per cent of all electricity generation, according to the Energy Generation in Wales 2016 report.

The Welsh Government’s cabinet secretary for energy, planning and rural affairs, Lesley Griffiths, said her priorities were to increase energy efficiency, reduce reliance on fossil fuels for energy and to “actively manage the transition to a low carbon economy”.

“That is why I commissioned the Energy Generation in Wales study to provide a complete picture of energy in Wales and for us to see the progress that has been achieved,” she said. “Today’s report shows we are already making very encouraging progress on renewable energy… By using our abundant natural resources in a sustainable way, we can ensure energy continues its important role in achieving our energy and decarbonisation targets. By doing so, we will deliver a prosperous and low carbon Wales.”