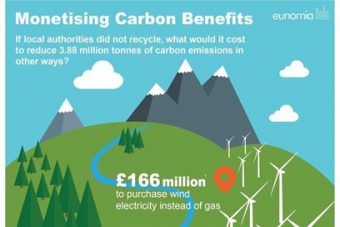 77% of Northern Irish councils are reported to have shown an upward trend and the total CO2 saving was 123,000 tonnes, or 68kg per capita. That enabled Northern Ireland to overtake England where just less than half of councils improved on the previous year’s results – but a similar number slipped back, leaving the CO2 savings at 67kg per capita.

Recycling in England, Wales and Northern Ireland resulted in 3.9 million tonnes of CO2 savings in 2014/15, the equivalent of flying from London to New York and back 1.5 million times.

According to one of Eunomia’s council tools, http://www.eunomia.co.uk/council-tools/, England still has the leading carbon saving council, Cheshire West and Chester. A high recycling rate and a source separated collection system that minimises the need for energy-intensive sorting of recyclable material meant the council achieved a saving of 109kg per person. That’s just ahead of the 108kg per person achieved in North Somerset, while Wales’s best performer was Ceredigion Council at 104kg.

Other leading authorities in England were Dorset Waste Partnership, Surrey and Buckinghamshire. Over in Wales, Ceredigion, Powys and Monmouthshire took the pole positions and in Northern Ireland, Omagh, Larne and Dungannon & South Tyrone are leading the way. Middlesbrough Council took the ‘biggest improver’ title after introducing a new collection system in 2014.

Across the board, the total CO2 saving is reported to be up over 20,000 tonnes from 2013/14, but the picture across the three nations is mixed. Wales is said to maintain a significant lead over its neighbours, and 64% of Welsh councils improved their performance in 2014/15.

The Welsh Government is reported to have put a real focus on trying to improve recycling rates, and its efforts have returned some pretty impressive results, with no authorities in Wales now ranked as ‘poor performers’. The average CO2 saving from recycling in Wales is now 84kg per person.

Eunomia’s director, Joe Papineschi said: “Progressive waste management policies, devolved governments and new collection systems are having a positive impact on the CO2 performance of recycling systems. Amidst some mixed results, there are some really outstanding stories. For example, councils collected 8% more food waste last year than in 2013/14 – despite only 37% offering separate food collections.”