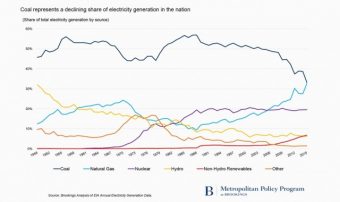 The coal industry is on the decline, but the reason for that decline has become a subject of political debate. Supporters of fossil fuels blame the energy policies of the outgoing Obama Administration, claiming the emphasis on renewable energy and lowering carbon emissions puts coal at a disadvantage.

President-elect Donald Trump has promised to “bring back coal” as part of what is expected to be an overall emphasis on promoting fossil fuels. But the current dire state of the coal industry is largely not be a matter of policies or regulation.

Instead, a number of different market forces have eroded coal’s competitiveness in the energy market. The Brookings Institution laid out those market forces in a concise report, built around five charts. One of the major forces working against coal is cheap and abundant natural gas, accessed through the controversial process of hydraulic fracturing—also known as “fracking.”

The U.S. Energy Information Administration predicts that natural gas will surpass coal’s share of the generating mix in 2016, the first time this has occurred. At the same time, the cost of renewable-energy sources like wind and solar have decreased, to the point where they are cost-competitive with fossil fuels in some situations.

The cost to build a utility-scale photovoltaic solar farm has dropped 80 percent since 2009, while wind farm costs have dropped 60 percent, according to the Brookings Institution. The economic competitiveness of natural gas and renewable energy is more meaningful at this particular moment, because flat electricity demand is driving utilities to seek the cheapest possible options for power generation, Brookings analysts say.

As domestic coal consumption decreases, exports are also weak, falling for the third consecutive year in 2015. U.S. coal exports are largely dependent on China and India, but China’s recent economic slowdown has dampened coal demand in that country. Both China and India are also expected to keep imports to a minimum for security and fiscal reasons, relying on local sources for the majority of their needs.

Finally, the productivity and profitability of the U.S. coal industry has rapidly declined over the past decade, after peaking in 2000, according to Brookings analysts. This is largely due to the exploitation of the cheapest and easiest-to-mine coal sources, requiring coal companies to turn to more difficult and costly mining operations. Overall productivity has rebounded somewhat in the past three years, but this may only be the result of the closing of less-efficient mines, and a one-time boost from the implement of certain new technologies.

A decrease in coal use for electricity generation is good news for drivers of electric cars, because these cars get cleaner alongside the sources of electricity used to charge them. But it also leaves open the question of how to stimulate the economies and preserve jobs in coal-producing states, the answer to which may well be transitioning to different industries altogether.