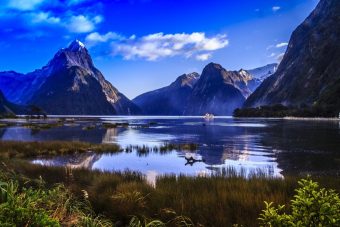 New Zealand had a general election this month, and the government was voted out of power. Already, the nation’s new Prime Minister, Labour’s Jacinda Ardern, has made climate change advocacy a priority. As well as promising to adhere to the Paris agreement and to make the country carbon neutral by 2050, she’s now considering giving special visas to those displaced by rising sea levels.

Such a promise would fulfill the promise made by the Green Party – one of the government’s coalition partners – which promised to give 100 visas per year to people seriously affected by climate change. Judging by comments made by the country’s climate change minister, Green Party chief James Shaw, these visas would mostly be given to those living on Pacific islands that are set to disappear in the near future.

If implemented, it would make New Zealand the first country in the world to recognize climate change as an official reason to seek asylum.

Although estimates vary, anywhere from 1 to 2 billion people will be forced to abandon their homes due to the encroaching oceans by 2100. These climate refugees have got to go somewhere, and Ardern’s government is essentially considering making New Zealand a haven.

A separate visa category for refugees has existed in New Zealand, and plenty of other countries, for some time now. However, the people these are granted to have traditionally been fleeing war, economic collapse, persecution, and so on. Climate change hasn’t been on the agenda.

Climate change, a phenomenon primarily driven by rich and developing countries, disproportionately affects poorer nations, particularly those along the coast or near the equator. Although the future will be full of climate change refugees from even the wealthiest of nations, it’s fair to say that what New Zealand wants to do – look out for the most at-risk first – is morally right.