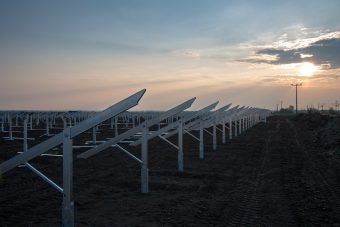 The New South Wales government has launched an ambitious climate change policy that could see the state achieve zero emissions by 2050.

On Thursday NSW’s environment minister, Mark Speakman, released draft plans for the NSW climate change policy framework, setting out the “aspirational goal” of zero emissions by the middle of the century. The government also released two other plans that set out in more detail how the policy would be implemented, the climate fund strategic plan and the plan to save NSW energy and money.

They set out in some detail how the state intends to increase investment in the renewable sector, help vulnerable families responding to climate change and reduce household bills.

“The $500m package represents a meaningful, responsible and measured investment that is consistent with and optimises the federal government’s emissions reduction policy,” Speakman said.

The NSW industry resources and energy minister, Anthony Roberts, said: “Attracting up to $3bn of investment and jobs in energy efficiency and advanced energy in NSW, this package will facilitate the acceleration of new technologies, such as battery storage, for a safe, reliable, low-cost transition to guarantee our state’s energy security.”

NSW said the plans were consistent with the federal government’s commitment to the Paris Agreement.

But the plans are unusual for a Liberal-led government, and may prove to be a contentious point with the federal government.

John Connor, chief executive of the Climate Institute, welcomed the announcement, saying: “With NSW now joining Victoria, South Australia and the ACT, over half of national emissions are now covered by governments targeting net zero emissions by 2050.”

He said the state government’s plan was smart to recognise that national commitments made before the Paris agreement didn’t add up.

“The national government’s 2017 review of its climate policies and consideration of post-2030 targets would do well to adopt or better this framework’s 2050 target and attempts to integrate climate risks and opportunities into decision making,” he said.

“Physics is beginning to catch up with politics and it is heartening to see both sides of the Australian political spectrum can engage with the risks as well as the opportunities of the climate challenge.”

“I regret to say that a number of the state Labor governments have over the years set priorities and renewable targets that are extremely aggressive, extremely unrealistic, and have paid little or no attention to energy security,” he said at the time.

The government is currently engaging in a public consultation process over the draft. Submissions close in December.