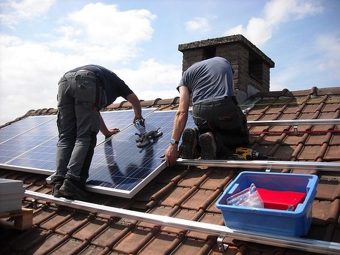 A new law that takes effect in just five days could impact solar panel users across the state.

Senate Bill 309 takes effect January 1st, 2018. Scott Biggs,with Jefferson Electronic in Indianapolis said “The solar market has heated up because the economics make more sense to save money for people.”

Right now, solar panel users get a credit on their power bill for putting excess energy back onto the power grid. But, some say that benefit is about to get a bit dimmer.

“I think if you don’t look past the headline, it looks scary. It looks like solar energy is not going to be a good thing or the utility company’s not going to let you do it. That’s not really true at all,” Biggs explained.

Under the new law, Biggs said customers who install solar panels after December 31st 2017 would get the credit, at current rates, for just the next 15 years. If you already have solar panels, or install them before year’s end, he says you are grandfathered in for 30 years.

“So, if you put in a new solar system on the second of January, you really don’t have anything to worry about for 15 years. And in 15 years, that will take affect and it will lessen some of the credit.” Biggs explained.

“I think the legislation has done us a favor, because it got more people talking about it. To the extent it’s a negative thing. I don’t really think it’s going to affect a lot of our customers 15 years down the road,” Biggs said.

Indiana’s investor-owned utility companies who lobbied aggressively for the measure said solar panel owners who feed excess power to the grid were being compensated too generously.