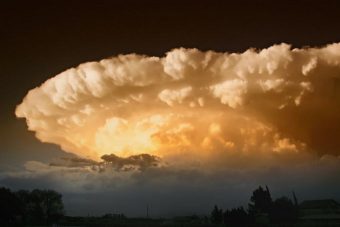 The New Mexico Attorney General’s Office and consumer advocates are petitioning state regulators to consider a new energy standard they say would protect utility customers and shareholders from the costs and risks associated with future environmental regulations.

The proposed standard calls for electric utilities to reduce carbon dioxide emissions from power plants that serve customers in the state by 4 percent a year through 2040. Supporters say that could amount to a reduction of several million tons of carbon dioxide, considered a prime contributor to global warming.

Steve Michel, the energy policy chief with the environmental group Western Resources Advocates, presented the proposal to the Public Regulation Commission on Wednesday. It will be up to commissioners whether to begin the rulemaking process, which would include gathering comments, technical workshops, and public meetings. Michel argued the importance of transitioning to cleaner energy sources, saying utilities can face significant costs if they wait until regulations are in place. He also said there would be environmental benefits to curbing the state’s reliance on coal-fired power plants.

“It’s almost certain that the U.S. is going to have to address carbon pollution. It’s just something that has to be done,” he said in an interview. “This proposed regulation would assure utilities in the state are well-positioned to address that as it emerges.”

The shift already is happening among investor-owned utilities. The state’s largest electric provider, Public Service Co. of New Mexico, is preparing to shutter part of its coal-fired power plant in northwestern New Mexico by the end of the year and it has invested almost $270 million in 15 solar generation facilities. The utility plans to add more solar to its portfolio under a plan submitted to regulators earlier this year.

Public Service Co. spokesman Pahl Shipley said the utility would reserve its comments on the clean energy standard until a final version of the proposed rule is drafted.

Michel told the commission that New Mexico’s utilities are well-positioned to comply with the standard given their current plans.

The push for more regulations and laws aimed at curbing emissions in New Mexico has waned somewhat in recent years as it appeared the federal government would be taking the lead in forcing utilities to divest themselves of coal-generated electricity.

That interest was renewed among environmental groups and some elected leaders when the administration of President Donald Trump indicated it would pull out of the 2015 Paris climate accord, an agreement signed by nearly 200 nations to reduce carbon emissions. Trump has also promised to help promote the use of U.S. produced coal. Attorney General, Hector Balderas, said his office supports the petition because he believes states, cities, and businesses will have to fill what he referred to as a regulatory void.

“This proposed clean energy standard would have New Mexico begin to do that,” he said.

A preliminary report recently produced by 13 federal agencies states the annual average temperature is already 1.18 degrees warmer the last 30 years than it was from 1901 to 1960. If carbon pollution continues unabated, the report suggests temperatures are projected to rise another 4.83 degrees by mid-century and 8.72 degrees by the end of the century, or a few degrees less if emissions are cut somewhat.

Michel said the 4 percent target identified in the proposal is consistent with the reductions scientists say would be needed to limit increases in temperature to prevent the most catastrophic effects of climate change. He also said the program would be consistent with similar efforts in California and the nine eastern states that participate in the Regional Greenhouse Gas Initiative.