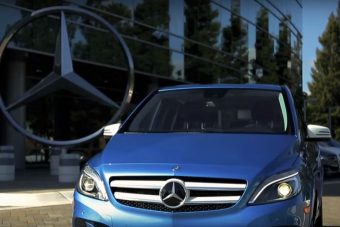 An electric-powered Mercedes SUV concept will be unveiled at the upcoming Paris motor show, which high-ranking insiders describe as its first step into a broad electric vehicle strategy.

The new concept, currently undergoing construction at Mercedes’ prototype workshop on the outskirts of Stuttgart in Germany, is said to provide “a clear insight” into the external appearance, interior appointments, technical layout and overall dimensions of the German car maker’s first truly dedicated electric vehicle  – a uniquely styled SUV conceived to take on the Tesla Model X as well as new electric SUVs planned by Audi and Jaguar.

The new zero-emissions SUV, tentatively planned for introduction in 2019, is the first in a series of a new electric vehicles currently under development by Mercedes, including an advanced upmarket saloon rival to the Tesla Model S and the recently unveiled Chinese LeEco LeSee, which has been conceived around the very latest in autonomous driving technology.

Up until now, Mercedes-Benz has based its limited number of production electric vehicles around existing models, namely the Smart Fortwo and Mercedes B-Class.

With the unveiling of the new SUV concept in Paris in late September, Mercedes will make public its plans for a range of uniquely styled and engineered electric vehicles to be offered as an alternative to its existing range of more traditional petrol, diesel and hybrid models.

As well as providing clues to a new electric vehicle platform under development at Mercedes – elements of which will be shared a soon to be unveiled hydrogen fuel cell propelled version of the GLC – the new SUV concept is also set to previews a brand new design language, developed by a team of in-house designers and set to be adopted by upcoming production version of the new electric SUV.

“We’ve created a whole new look that takes into consideration the unique properties of electric vehicles,” a Mercedes-Benz official with knowledge of the new electric vehicle concept revealed to Autocar.

Meanwhile, Mercedes-Benz marketing boss, Ola Källenius, has hinted the German car maker may move to boost its electric vehicle efforts with an entry into Formula E.

Speaking on rumours the German car maker is actively planning to join Jaguar, Renault, Citroen and Volkswagen in supporting the global single seater electric vehicle race series, Kallenius said: “There’s no decision at the moment, but we are looking at it with great interest. It provides an interesting platform for electric vehicles though it would be important for us to ensure there is a clear technology transfer to our road cars.”