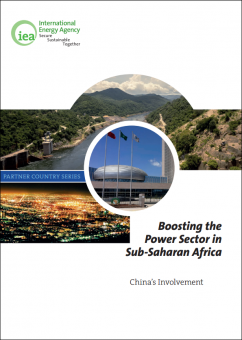 Chinese companies are playing an increasingly significant role in the development of the power sector in sub-Saharan Africa, and accounted for 30% of new capacity additions in the region over the last five years, according to a new study published by the International Energy Agency.

This publication, Boosting the Power Sector in Sub-Saharan Africa: China’s Involvement, is part of the IEA Partner Country series and offers the first pan-regional overview of the involvement of Chinese companies in the region’s electricity supply system.

The African continent faces major electrification challenges. More than 635 million people live without electricity in sub-Saharan Africa. As part of a strategy to expand international investments and gain access to foreign markets, the People’s Republic of China and its state-owned companies have invested substantially in Africa in recent years.

The new IEA report provides a comprehensive analysis of these projects, which include investments of around $13 billion between 2010 and 2015 from China. These projects are financed largely through public lending from China.

“African countries have relied heavily on China to support the expansion of their electricity systems, to enable growth and improve living standards,” said Paul Simons, the IEA’s Deputy Executive Director.

Greenfield power projects contracted to Chinese companies have become widespread in the region. Over half of all projects are based on renewable energy, mainly hydropower.

Training of local technicians is essential to maintain efficiency and performance of newly built plants, In 2014, a special report from the IEA’s World Energy Outlook on sub-Saharan Africa showed that the lack of energy access and the shortage of electricity supply were severe constraints to better living conditions and hampered economic growth. In line with its policy to open its doors to emerging economies and become a global hub for clean energy technologies, the IEA is dedicated to supporting Africa’s electricity sector development.