The Humane Society of the United States just released a report on their investigation into widespread animal testing. The inquiry lasted a little over three months and discovered that tens of thousands of dogs are being killed annually in the name of product testing. 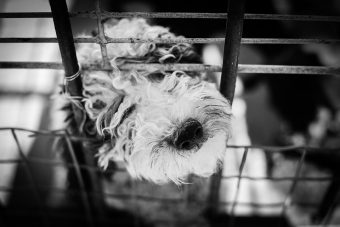 The study uncovered laboratories across the United States where scientists are using beagles and hounds to test toxicity levels in drugs, dental implants and pesticides. Over the course of 100 days, one undercover operative recorded almost two dozen animal experiments that featured dogs as the primary subjects. At the end of some of these studies, all of the dogs were terminated while others suffered throughout the trials.

One of the documented experiments involved 36 beagles and was commissioned by Dow AgroSciences. The company was testing pesticide use on the dogs and ordered researchers to force the poor animals to swallow fungicide pills. The study is scheduled to end this coming July, and any of the beagles that survive are going to be killed.

Dow has issued a public statement about animal experimentation and confessed that these types of studies are not needed. The U.S. government has also stopped requiring animal testing on human products, so there is really no need for these dogs to be subjected to these terrible experiments. The reality, however, is that animal experiments are more widespread than people realize.

“The disturbing findings at this facility are sadly not unique. Experiments are happening at hundreds of laboratories each year throughout the country, with more than 60,000 dogs suffering,” said Kitty Block, president and CEO of the Human Society of the United States.

The undercover investigation was undertaken in a Michigan facility called Charles River Laboratories. Animal testing is carried out in similar facilities across the U.S., but also in government buildings, universities and for-profit institutions. Commercial breeders, such as Marshall BioResources, provide the majority of dogs used in animal testing.

Apart from Dow, other companies linked in the investigation include Paredox Therapeutics and Above and Beyond NB LLC. By raising awareness about the issue, the Humane Society hopes to put an end to animal testing and find homes for the animals who have survived.

Source: Inhabitat, via Human Society of the United States