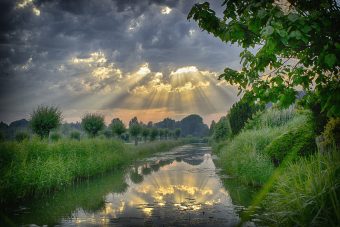 The UN Decade on Ecosystem Restoration is launching in June this year. The goal is ambitious – to trigger a global movement for restoring the world’s ecosystems. This is not merely for nature’s sake, say experts. Mounting evidence shows that a global re-greening could help humanity adapt to climate change.

“The momentum for nature-based solutions is building and the Global EbA Fund is ready to push this work to the next level,” says Tim Christophersen, UNEP’s Coordinator of the UN Decade on Ecosystem Restoration. “In order to bring nature-based solutions to scale, this fund will create synergies with other key initiatives, including our Restoration Seed Capital Facility, the Global Adaptation Network and IUCN’s Friends of EbA network.”

The call for proposals comes with the world already experiencing the early effects of climate change. Last year was one of the warmest on record and some 50 million people were directly affected by floods, droughts and storms, according to UNEP’s Adaptation Gap Report 2020. The publication found that many countries are struggling to adjust to a “new climate reality” and said that even if the world manages to live up to the Paris Agreement, climate change will have a profound impact on many already-vulnerable communities.

One example of ecosystem-based adaptation can be found in the Great Green Wall of Africa. With the Sahara Desert expanding southward, wiping out watering holes and livelihoods in its path, many African countries have joined forces to plant an 8,000km band of trees and bushes across the entire width of Africa. When finished it will be the largest living structure on the planet.

The barrier holds back the desert by retaining moisture in the ground and keeping the soil intact. It brings greater food security to an exceptionally dry region by improving the soil for crops – all the while, drawing millions of tonnes of carbon out of the atmosphere. The Great Green Wall initiative is also protecting communities from climate change by combining restoration with investments in sustainable agriculture and water management.

There are enormous economic benefits from ecosystem-based adaptation and nature-based solutions more broadly. Every dollar invested in ecosystem restoration generates USD 7 to USD 30 in total benefits. Nature-based solutions can be a job-creation machine in a time of COVID-19 and economic uncertainty. Between 10 and 40 jobs are supported per USD 1 million invested in nature-based approaches, which is almost 10 times the job creation rate of fossil fuel investments.

Protecting forests and mangroves alone could prevent global economic losses from climate change of over USD 500 billion annually by 2050.

“If climate change is the disease, nature is part of the cure,” says Christophersen.

Despite the numerous benefits and the growing global interest, nature-based solutions for adaptation are still underutilized, according to the Adaptation Gap Report. This is due to three main barriers: firstly, a lack of awareness of the benefits; secondly, policy and regulation shortfalls that influence their attractiveness; and thirdly, limited access to finance. The Global EbA Fund will be prioritizing proposals that explicitly aim to overcome these barriers.

“IUCN has been at the forefront of Ecosystem-based Adaptation for over a decade now, harnessing the power of nature to increase the resilience of global communities who face the brunt of climate change,” says Stewart Maginnis, Global Director, Nature-based Solutions Group, IUCN. “By supporting a range of high-quality and diverse EbA projects, the Global EbA Fund will encourage innovation and scaling up of NbS for adaptation worldwide.”

The fund will also prioritize small grants for “catalytic” initiatives that can swell into a mass worldwide movement, where ecosystem-based adaptation becomes a core approach for tackling climate change.

The first call for proposals will focus on grants of USD 50,000 to USD 250,000 and will involve a rolling application process. Successful applicants will be selected within three months after the application is made.

The fund, which has received a 20-million-euro-injection from the Federal Environment Ministry of Germany, through its International Climate Initiative, will also collect evidence and stories about ecosystem-based adaptation initiatives, and develop lessons for scaling up the practice.