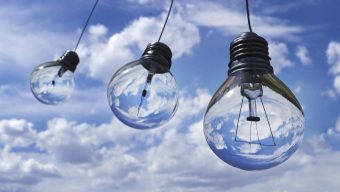 US researchers say they have developed a technique that can significantly improve the efficiency of the traditional incandescent light bulb. These older bulbs have been phased out in many countries because they waste huge amounts of energy as heat. But scientists at MIT have found a way of recycling the waste energy and focusing it back on the filament where it is re-emitted as visible light. The development has been reported in the journal Nature Nanotechnology. Little has changed in the technology of the incandescent light bulb since they were commercially developed by Thomas Edison in the US in the 1880s.

They create light by using electricity to heat a thin tungsten wire filament to temperatures of around 2,700C. This causes the filament to glow and produce a broad-spectrum warm white light. However light bulbs of this type are hugely inefficient – they only convert around 2-3% of the energy they use into light – the rest is wasted as heat. They have long been a target for green campaigners, concerned about climate change.

This has seen the bulbs banned in the European Union, Canada and their manufacture and importation has been phased out in the US. They’ve been replaced by more expensive compact fluorescent (CFL) and LED bulbs which are significantly more efficient at around 13%. Now researchers at MIT believe they have developed a technique that could turn the weakness of the traditional incandescent bulb into strength. Using nanotechnology, they’ve built a structure that surrounds the filament of the bulb and captures the leaking infrared radiation, reflecting it back to the filament where it is re-absorbed and then re-emitted as visible light. The structure is made from thin layers of a type of light-controlling crystal. A key aspect though is the way that these layers are stacked, with visible wavelengths allowed to pass through while infrared get reflected back to the filament as if in a mirror.

“It is not so much the material you make the surrounding structure from, it is how you arrange the material to create the optical filtering property that will recycle infra-red light and let the visible light through,” Ognjen Illić, the paper’s lead author told BBC News. In theory, the crystal structures could boost the efficiency of incandescent bulbs to 40%, making them three times more efficient than the best LED or CFL bulbs on the market. The researchers have built their first proof-of-concept units which reach an efficiency of 6.6%, but even that is almost three times the level of a standard incandescent bulb. So do the researchers think that they can build a better light bulb?

“I would not exclude the possibility,” said Prof Marin Soljačić, another author on the paper. “Thomas Edison was not the first one to work on the design of the light bulb, but what he did was figure out how to mass produce it cheaply and keep it stable longer than 10 hours, these are still the the two critical criteria. These are the questions we are trying to answer now,” he said.

The scientists point out that improving light bulbs is but one of the options that could spring from this development. The authors say it could have “dramatic implications” for the performance of other energy conversion technologies. “We have this huge challenge that the world is facing right now, global warming and energy efficiency and this gives you one more tool in the toolbox to meet that huge challenge,” said Prof Soljačić. “We are very excited about the potential though.”