One of the world’s first net zero carbon neighbourhoods will be constructed in Wales after Neath Port Talbot council approved the development of 35 homes able to generate more clean energy than they use. 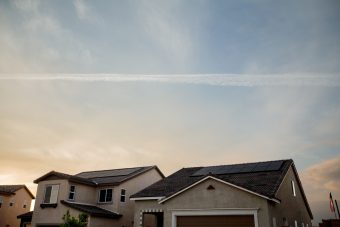 Development of the £8m project in Pontardawe in south Wales is expected to begin this spring. The residents of Parc Hadau will pay no energy bills because the development will use a mixture of renewable energy technologies to generate enough clean electricity to power its homes over the year.

The two-, three- and four-bedroom homes will be equipped with solar panels and energy-storing batteries, ground-source heat pumps and innovative ventilation systems.

Sero Homes, which was founded in Wales two years ago, said Parc Hadau would provide high-quality, affordable housing through long-term index-linked leases. It will also be the first scheme to meet the UK Green Building Council’s (UKGBC) definition of net zero carbon by tracking the development’s energy use and carbon emissions in real time.

Richard Twinn, a policy adviser at the UKGBC, said: “Meaningful action over the next 10 years will be critical to help avoid the worst impacts of climate change. The energy used in homes accounts for around 20% of the UK’s emissions, so if we’re going to radically reduce emissions, we need all of our new homes to be net zero carbon in operation by 2030 at the latest.”

When Parc Hadau needs to draw on electricity from the grid, such as on cold winter nights, Sero will measure the carbon intensity of the imported electricity and later export enough clean energy in return to balance the overall carbon emissions.

James Williams, the managing director of Sero Homes, said: “The principles underpinning our vision for housing are simple – people’s homes should minimise the harm done to our planet and they shouldn’t cost the earth to run.”

The 11 two-bed homes, 22 three-bed homes and two four-bed homes will not be available for sale on the open market. Instead, Sero plans to offer the properties on long-term, index-linked leases to provide residents with security, without the large deposits needed to get on to the property ladder.

“The current housing market is failing to achieve this, and Parc Hadau will bring to life, at scale, this vision for better homes for future generations,” Williams said.

The Parc Hadau project comes almost seven years after the Treasury scrapped a policy that called for all new homes to be carbon neutral from 2016.

The policy, first put forward in 2006 by the then chancellor, Gordon Brown, would have ensured that all new homes from 2016 would generate as much renewable energy as they would use in heating, hot water, lighting and ventilation.

The Labour party’s recent election manifesto recommitted the party to net zero carbon housing, with a pledge to make all new homes carbon neutral by 2022.

“The climate change agenda may have gathered pace in recent years and months, but the answers to these huge challenges are needed right now,” Williams said.

“Parc Hadau will be an international exemplar of what great places to live can look like, and we hope will be one of many opportunities for us to create new neighbourhoods across the UK that [give] more people access to great-quality, zero-carbon homes at a time when they are needed most,” he added.