A new report outlines the disastrous effects that air pollution is having on our national natural treasures. 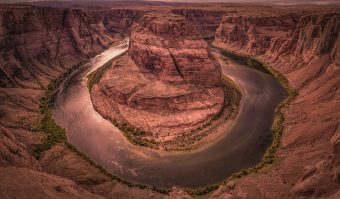 In 1916, President Woodrow Wilson signed the National Park Service Organic Act, a federal law that established the National Park Service (NPS). The role of NPS would be to oversee Federal areas known as national parks, monuments, and reservations. The purpose of these Federal areas, according to the Act, is to “conserve the scenery and the natural and historic objects and the wild life therein and to provide for the enjoyment of the same in such manner and by such means as will leave them unimpaired for the enjoyment of future generations.”

According to a new report by the National Parks Conservation Association (NPCA), 96 percent of America’s national parks are plagued by significant air pollution problems.

The report, “Polluted Parks: How America is Failing to Protect Our National Parks, People and Planet from Air Pollution,” looked at damage from air pollution at 417 national parks based on harm to nature, hazy skies, unhealthy air and climate change. Additional findings reveal that:

Since things like this become so politicized these days, it should be noted that NPCA is a non-partisan organization founded in 1919 as a citizen’s watchdog for the National Park Service. Their concern is with the state of the parks.

“The poor air quality in our national parks is both disturbing and unacceptable. Nearly every single one of our more than 400 national parks is plagued by air pollution. If we don’t take immediate action to combat this, the results will be devastating and irreversible,” said Theresa Pierno, President and CEO of NPCA.

“When people think of iconic parks like Joshua Tree or the Grand Canyon, they think of unspoiled landscapes and scenic views. I think they would be shocked to know that these are actually some of our most polluted national parks. Air pollution is also posing a health risk to some of the 330 million people who visit our parks each year, as well as the communities who surround them. The challenges facing our parks are undeniable, but so is our resolve to help clear their air and ensure they are protected as they were meant to be, by both their founders and by the laws in place to protect them.”

Indeed, when I first read the report my mind went directly to the magnificent glory that is the Grand Canyon. “How can the Grand Canyon be affected by air pollution?” I wondered?

The park’s NPS site had an answer:

“Most visitors who come to national parks expect clean air and clear views.

However, Grand Canyon National Park (NP), Arizona, world-renowned for its breathtakingly iconic views, lies downwind of polluted air from coal-fired power plants in the Four Corners region, nearby mining, and urban and industrial pollutants from Mexico and California.

Air pollutants carried into the park can harm natural and scenic resources such as forests, soils, streams, fish, and visibility.”

Of course, air pollution knows no boundaries. Much of the parks’ pollution begins with the extraction of fossil fuels – including oil, gas and coal – and burning them in power plants and vehicles. Such pollution has no problem drifting hundreds of miles, making few places immune to its devastating impact.

For the report, NPCA analyzed an array of data sources, much of it from NPS itself. The research included 417 national park sites, and looked at air pollution vis-a-vis four categories: Harm to nature, hazy skies, unhealthy air, and climate change. For each of those, the impact were ranked as significant, moderate, or little to no concern.

Harm to Nature: The findings show that air pollution is hurting sensitive species and habitat at 368 national parks. At 283 parks, the problem is of a significant concern and in 85 parks, the concern level is moderate.

Hazy Skies: At 370 parks, visibility impairment is either a moderate or significant concern (304 and 66 parks respectively).

Unhealthy Air: 354 parks have air that is unhealthy to breathe at times. At 87 parks, ozone levels are a significant concern, and another 267 parks have a moderate level of concern.

Effects of Climate Change: Climate change is a significant concern for 335 parks. These parks are experiencing changes in climate through extreme trends in temperature, precipitation, or early onset of spring.

While this isn’t an issue that should be politicized, we can’t escape the fact that politics are playing a role in this depressing state of affairs. Over the last half a century, the Clean Air Act has worked to noticeably reduce pollution. With the current administration’s far-reaching collection of rollbacks and changes to environmental policy – and its favoring of things like the fossil fuel industry – today, air pollution is on the rise. As the report notes, enforcement actions against polluters have plummeted by 85 percent, and now scientists project that we will be facing a climate crisis much sooner than previously thought.

“At a time when the climate crisis facing the planet is irrefutable, the laws that protect our climate and the air we breathe are being challenged like never before as this administration continues to prioritize polluters’ interests over the health of our people and parks,” said Stephanie Kodish, Clean Air Program Director for NPCA.

“America’s national parks are some of the most beloved places on earth and provide once in a lifetime experiences, but the iconic wildlife and irreplaceable natural and cultural resources that make these places so special are being seriously threatened by climate change and other effects of air pollution.”

Thankfully, there is a simple solution: Reduce air pollution and transition to clean energy. Nobody wants a population suffering from asthma and all the other deleterious effects of dirty air, right? And nobody wants our beautiful national parks to be choking from the same. If they are to be “unimpaired for the enjoyment of future generations,” then we better get cracking.