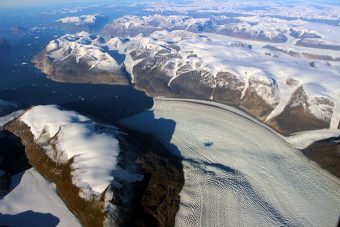 Scientists have had their eyes on Greenland as its iconic glaciers have begun disappearing due to a warming climate. But, what they didn’t expect to see was a whole new type of melting.

The Rink Glacier, the largest glacier on the west coast of Greenland, was exhibiting some strange melting behaviors during the hot summers of 2010 and 2012 that can only be described as a “warmed freezer pop sliding out of its plastic casing.” This kind of mass melt lasted four months between June and September in 2012 with a loss of 6.7 gigatons of mass.

The mass moved 2.5 miles every month for the first three months, then 7.5 miles all at once in September. That’s actually pretty speedy considering the Rink Glacier usually melts at a speed of one to two miles a year. But, still, it was slow enough that NASA had to use aerial GPS data to measure the movement.

“You could literally be standing there and you would not see any indication of the wave,” said Eric Larour of the Jet Propulsion Laboratory and coauthor of the research. “You would not see cracks or other unique surface features.”

There was also a similar melting pattern in the summer of 2010, but scientists didn’t recognize it on first glance and had to go back and quantify it with the data from that period. Sure enough, there was a wave in 2010 as well, smaller than the one in 2012, but it moved at the same speed.

NASA scientists aren’t quite sure why this is happening but they suspect it has something to do with surface melting. During these two summers, there was more standing water due to melting than ever before. In fact, in 2012, more than 95 percent of the surface snow and ice was melting, creating giant lakes on top of the Rink Glacier. The water had to flow somewhere, so it might have carved channels through the ice, weakening the infrastructure of the glacier. This lubricated the ice mass, allowing it to slide out of its pocket, slowly, over the course of the summer.

“Intense melting such as we saw in 2010 and 2012 is without precedent, but it represents the kind of behavior that we might expect in the future in a warming climate,” said coauthor Erik Ivins of JPL. “We’re seeing an evolving system.”

Understanding how and why the ice melts is essential to understanding how climate change is affecting the glaciers over time. This ultimately helps scientists calculate sea level rise and changes to the global carbon cycle.