Microplastics, which get gobbled up by whales, deep-sea fish and plankton, have also turned up in the bodies of mosquitoes, scientists have revealed. 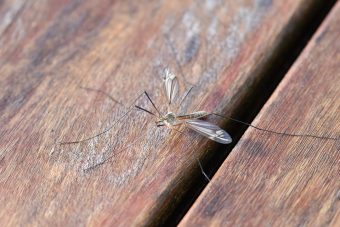 The research, published Wednesday in the journal Biology Letters, is the first to show that bits of plastic can be transferred between a mosquito’s life stages that use different habitats.

For the study, the scientists fed the larvae of Culex pipiens—the common house mosquito—different-sized fluorescent polystyrene beads. The researchers found that the tiny fragments stayed in the larvae’s bodies as they matured into flying adults.

“Larvae are filter feeders that waft little combs towards their mouths, so they can’t actually distinguish between a bit of plastic and a bit of food,” lead researcher Amanda Callaghan of the University of Reading told The Guardian. “They eat algae, which are more or less the same size as these microplastics.”

The study suggests that plastics could enter the larger food chain if birds, bats or other creatures eat the mosquitoes.

“The implication is that you can have plastics at the bottom of the pond that are now going up into the air and being eaten by spiders and bats and animals that normally wouldn’t have access to that plastic,” Callaghan told The Independent.

The researchers are now studying if consuming plastics harms the mosquitoes, The Guardian reported.

“It is a shocking reality that plastic is contaminating almost every corner of the environment and its ecosystems,” Callaghan added. “Much recent attention has been given to the plastics polluting our oceans, but this research reveals it is also in our skies.”