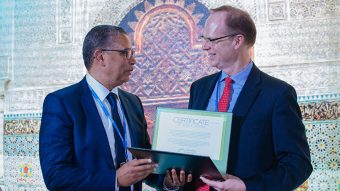 The International Energy Agency (IEA) welcomed the Kingdom of Morocco as an Association Country recently, deepening the partnership between both parties for a more sustainable and secure energy future.

Morocco becomes the latest member of the IEA family and the first country in the Middle East and North Africa to join the IEA’s Association initiative aimed at opening its doors to emerging economies. Morocco is now the IEA’s fifth Association country, joining China, Indonesia, Thailand, and Singapore.

The IEA’s collaboration with Morocco began in 2007, focusing particularly on the areas of energy policy, statistics, and research and development (R&D). Two years later, the government adopted a national energy strategy, setting clear targets for wind, solar and hydropower.

The IEA’s 2014 energy policy review of Morocco was the first dedicated to a country in the Middle East and North Africa region. Earlier this year, the IEA published a report under its Partner Country Series setting out the findings of a pilot study testing the IEA’s Clean Energy Technology Assessment Methodology (CETAM) in Morocco, one of only three countries chosen for the case study. The  IEA and Morocco plan to develop new joint programmes under Association to support Morocco in its transition toward a low-carbon economy.