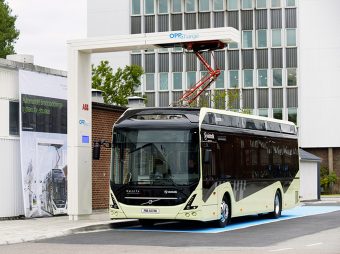 Up until recently, the majority of the US public transit system was powered by polluting fossil fuels such as diesel, which pose a serious risk to public health and contribute to global warming. Now, as cities turn to zero emission transportation goals and bus fleets transition to battery-electric vehicles, quiet and sustainable public transportation is becoming more and more common.

Electric buses deliver numerous benefits to the communities they serve.

Newark Airport’s Port Authority mission to deploy 36 electric buses at its 3 metro airports is now complete. The transition is an important component of a broader environmental agenda for the agency, which includes replacing half its fleet of light duty vehicles with electric powered cars and light vans within 5 years.

Executive Director Rick Cotton announced that conversion of its fleet of airport diesel shuttle buses to battery powered electric buses is nearly finished — and 3 months ahead of schedule. “Our commitment was to make 100 percent of our shuttle fleet fully electric, and we will achieve that in the days ahead,” Cotton said.

The Port Authority transition to battery-electric buses began in October, 2018 with the acquisition of 36 Proterra battery-electric buses. The initial cost per individual bus is USD 960,000, but reductions in fuel and maintenance over the lifetime of an electric bus reduce its overall costs, which have a 10-year service life expectancy.

The authority’s Proterra electric buses have a range of 150 to 230 miles between charging.

Airports are well-suited for battery-electric bus transportation. “The terrain is flat, the routes are short, and they’ve performed extremely well,” Cotton noted. “We made available all the data on the performance of our electric buses. There have been discussions within this and other regions. We are happy to share our experiences.”

In 2018, the Port Authority pledged to follow the Paris Climate Agreement and reduce emissions 35 percent by 2025 and 80 percent by 2050. On January 17, 2020, Governor Murphy signed landmark legislation to boost the use of plug-in electric vehicles in New Jersey. Measures include a 100  percent electric airport shuttle bus fleet – one of the largest in the country – as well as USD 100 million in energy efficiency retrofits and new renewable energy initiatives across Port Authority facilities. 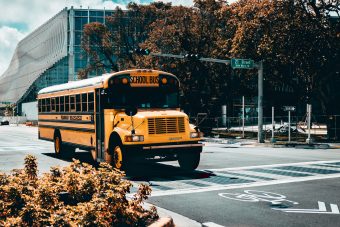 Beverly, Massachusetts unveiled its first all-electric school bus this week. The new Thomas Built Buses Inc’s Saf-T-Liner® C2 Jouley electric school bus is powered by Proterra® electric vehicle technology. “We are proud to be one of the first communities in Massachusetts to acquire an electric school bus and to begin transitioning our fleet from diesel to electric,” Mayor Michael Cahill stated. “This bus produces zero emissions which creates a healthier environment for the students and residents.”

Among the community’s sustainability goals, Beverly Public Schools intends to convert its entire fleet of 27 school buses from diesel to battery-electric.

Cahill is a member of the Climate Mayors Steering Committee, a group of over 20 mayors who will serve as a leading voice in efforts to further climate action across the US making up the Climate Mayors coalition, which represents a network of 461 US mayors across the country who are committed to upholding the Paris Climate Agreement.

BYD North America has delivered 4 battery-electric K7M buses to Columbia, Missouri’s transit agency, Go COMO. The buses were manufactured in the US at Lancaster, California by members of the Sheet Metal, Air, Rail, and Transportation (SMART) Union, Local 105 at BYD’s factory.

With the launch of these BYD buses, Columbia becomes the first city in Missouri to put zero-emission transit vehicles into revenue service. The K7M bus specs include 22 seats, a range of up to 150 miles, and a charging time of 2.5 to 3 hours.

“We are thrilled to partner with Go COMO,” said Patrick Duan, BYD North America Vice President. “Our American-built buses are well-made, reliable, and bring innovative technology to Main Street in communities around the nation like Columbia.”