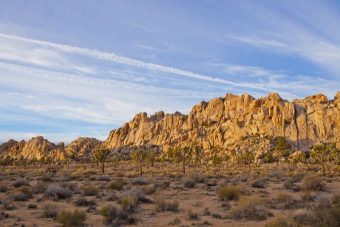 After opening up most of our country’s shorelines to offshore drilling, the Trump administration is now reconsidering an ambitious and innovative plan to conserve desert lands while generating renewable energy.

The administration intends to reopen the Desert Renewable Energy and Conservation Plan (DRECP) for the Mojave Desert finalized in September 2016. The plan was based on more than 8 years of stakeholder input—more than 16,000 comments were submitted—hard science and balancing the need for conservation and clean energy.

Despite Interior Sec. Ryan Zinke’s recent comments, there is absolutely no reason to re-open it. Zinke couldn’t have been more wrong when he said, “Five hundred miles of solar cells is not compatible with the habitat.” The whole point of the DRECP was to make sure that renewable energy development and conservation take place in the right areas so that both can co-exist in the desert.

In reality, the DRECP would allow development of solar projects on a small fraction of the 10 million acres of federal land included in the plan. There certainly is no proposal for a single, contiguous solar facility covering 500 square miles that Zinke’s misstatement warns of. His blatant error reflects this administration’s outright hostility to clean energy and allegiance to fossil fuels at any costs.

Instead of scare tactics, the focus now should be on robust implementation of the plan, not re-opening it at tax payers’ expense. Re-opening the DRECP jeopardizes more than four million acres of important conservation lands. It could also threaten many of the desert’s most threatened and endangered species such as majestic bighorn sheep and ancient desert tortoise.

Opening the DRECP will also create uncertainty for local counties, industry, wildlife agencies, outdoor recreationists and rural communities. NRDC will fight efforts to undo the work of 8 years of stakeholder input and planning, which will waste a great deal of time and money invested by both the federal and state governments and is certain to result in a less balanced plan.