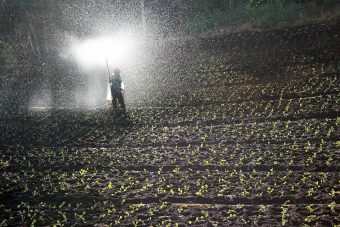 Many organic fertilisers being applied to gardens and farms contain tiny fragments of plastic, according to a new study.

Widely considered a problem affecting the oceans, this work suggests microplastics may actually be far more pervasive. Having entered the soil, the scientists behind the study have warned these tiny fragments could end up in the food we eat.

The production of organic fertilisers is generally considered environmentally friendly as it involves recycling food waste from households and other sources to make useful products that can be used to grow more food. However, contamination of the waste used to produce these fertilisers – which are used by gardeners and farmers alike – means tiny microplastics are making their way into the soil.

“One example is people use plastic bags and then put everything together in the bin, and then this is entering the waste treatment plant and ending up in the fertilisers,” Professor Ruth Freitag, one of the study’s authors, told The Independent.

Professor Freitag, who is based at the University of Bayreuth in Germany, said this is a particular problem in her country due to its progressive composting policy.

Close to 12 million tons of food and garden waste ends up being either composted or sent to biogas fuel plants each year in Germany, due to legal requirements concerning the disposal of organic waste.

By sampling fertilisers produced at different kinds of waste treatment plants, Professor Freitag and her colleagues were able to determine the extent of the contamination problem.

They found the samples had varying amounts of tiny fragments,  fibres and spheres of plastics, all smaller than five millimetres, depending on the care with which the compost had been processed. Their results were published in the journal Science Advances.

Though concentrations in the samples were fairly low, with a maximum of around 150 microplastic particles per kilogram, from here the researchers say it is likely the particles will enter the food chain.

Ultimately, they could even end up being consumed by humans.

A major problem with research into microplastics, according to Professor Freitag, is that so little is known about them.

Almost all research into these tiny pollutants has focused on their presence in the sea, and the threat they pose to marine life.

The UK has banned the manufacture of microbeads – tiny pieces of plastic added to some cosmetic products – but these are low-hanging fruit when considering the wider problem of microplastic pollution.

The origin of most microplastics in the environment remains a mystery.

“The problem is microplastics are not made in the ocean,” said Professor Freitag.

“It is of course quite nice and safe to investigate it there because nobody is responsible – it’s just somewhere in the ocean.

“Most of it is manmade and created on land, but we don’t know very much about these pathways.”

While Germany has been particularly forward-thinking in its treatment of organic waste, Professor Freitag said it is likely the conversion of organic waste into fertiliser will become more widespread everywhere – making this issue all the more relevant.

“Burning organic waste is not a very efficient procedure and putting it into landfill cannot really continue, so in the end it is going in that direction,” she said.

If this is the case, it will be vital to take a cautionary approach that attempts to keep the plastic pollution to a minimum.

A key point from the study was the finding that different kinds of waste treatment plant produce vastly different concentrations of plastic in the fertilisers.

“We have plants where they use a lot of precautions and there we find hardly any plastic particles, and other plants where they simply use a shredder to prepare everything and break it down – there you find a lot,” said Professor Freitag, adding that this finding shows it is possible to keep organic fertiliser production microplastic-free.